Utah is About to Make it Legal to Have Sex Outside of Marriage March 7, 2019 Hemant Mehta

Congratulations, single people of Utah: Sex outside of marriage will soon be legal. 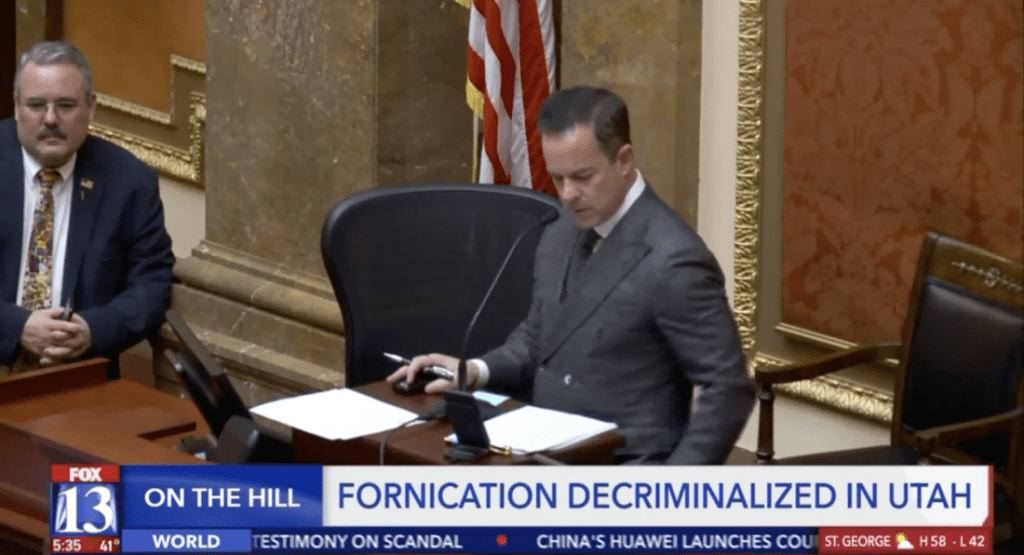 Which is to say it isn’t legal right now because Section 76-7-104 of the Utah Code says any unmarried person who “voluntarily engage[s] in sexual intercourse with another” is guilty of a class B misdemeanor… which theoretically means having sex after a date could land you a six-month prison sentence and a $1,000 fine.

S.B. 43, however, will repeal that section of the law. The bill has passed through the State Senate and State House, and now heads to Gov. Gary Herbert for a signature. It’s about damn time.

The legislature previously passed a bill removing adultery and sodomy among consenting adults as crimes in Utah. Rep. Paul Ray, R-Clearfield, said court rulings have found the laws are unenforceable and it was time to remove them from the books.

The bill wasn’t popular with some of the more conservative members of the Utah House of Representatives. Rep. Merrill Nelson, R-Grantsville, said he objected. So did Rep. Keven Stratton, R-Orem.

“What is legally is often far below what is morally right,” Rep. Stratton said. “And I recognize our laws are not strong enough to rule a immoral people.”

The irony, of course, is that many of those same Republicans who want to keep this law in place still belong to a party led by a president who paid hush money while in the White House to try and cover up his multiple affairs. That gets a pass, somehow.

It’s not clear if anyone was ever prosecuted under this 1973 law, though police would have a hard time doing so even if they wanted to since proving it would require an invasion of privacy. So good riddance to a useless law that was always meant to police people’s private interactions.

(Screenshot via Fox13Now. Thanks to Scott for the link)

March 7, 2019 French Cardinal, Convicted of Ignoring Child Sex Abuse, Will Resign from Church
Browse Our Archives
What Are Your Thoughts?leave a comment