For some reason, Walmart launched a marketing campaign called “Love Is In The Aisle: A dating show at Walmart.” Because when you think Walmart, you think love. Or something.

The second episode featured two gay men awkwardly getting to know each other on a shopping trip. It’s all kinds of cringe-worthy… but that’s also kind of the whole point. It’s totally cheesy, but it also shows how there’s a huge variety of products you can get at the store.

The only appropriate reaction to that video is, “I want my two and a half minutes back.” But a Christian hate group is now claiming that the ad (that you didn’t even know existed until a moment ago) is homosexual propaganda that needs to be eradicated from the internet. For shame, Walmart. For shame.

It’s only a first date, but [the American Family Association] seems really worried that Pat and Andy might hit it off and end up strolling down another kind of aisle, asserting that “for most Christians and other traditionalists, the idea that marriage is between a man and a woman is sacred.”

“We’ve seen many large corporations reject that in their marketing,” adds the pearl-clutching AFA President Tim Wildmon, “but I honestly never thought Walmart would join the cultural revolution and reject the beliefs of its customer base.”

AFA has sent an action alert urging its “nearly 1 million friends and supporters” to sign a petition complaining that Walmart “has chosen to begin promoting the normalization of homosexuality in conflict with the beliefs of its customer base.”

“It’s clear that Walmart is on the path of elevating homosexual relationships to the same level as the male-female model of marriage,” says AFA’s petition, which asks the company’s president to remove the “pro-homosexual video” and remain “neutral on the controversial issue of homosexuality.”

This is why these conservative Christians are called hate groups. Walmart isn’t pro-homosexuality any more than they’re pro-plaid shirts. Showing the existence of two gay guys on a date isn’t an argument for homosexuality any more than Episode 3 promotes interracial dating. The ads depict real people (or at least real actors). They’re not making some stealth argument for marriage equality… especially since that’s already legal.

The fact that Wildmon sees this video and jumps to the conclusion that it’s a rejection of everything he stands for tells you how much hate permeates his Christian bubble.

There are all kinds of good reasons to criticize Walmart. This isn’t one of them.

Though if the AFA’s desperate campaign against Target for its trans-friendly bathroom policy is any indication, Walmart has nothing to worry about. Hell, it’ll take days before most of their members even figure out how to turn on a computer. 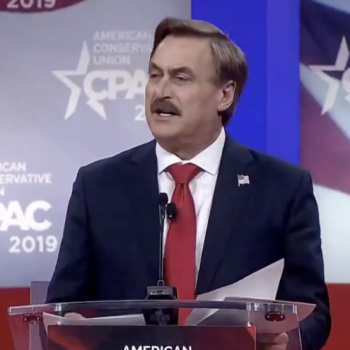