Weeks after a Christian-owned grocery store in Arkansas said “Heaven has a wall” in one of its advertisements, the Apostolic Faith Church in Springdale has echoed the message.

“When I first passed the sign, I almost wrecked my car because I couldn’t really believe that that’s what I read,” Springdale native Alice Gachuzo-Colin said.

“Heaven has strict immigration laws, hell has open borders” is the message that was written across the sign for Apostolic Faith Church.

“When you put that on a sign in city that is so rich in diversity as Springdale, it is essentially a slap in the face to all the undocumented people that help make Springdale the place it is today,” Gachuzo-Colin said.

The church told a local reporter that the sign has been changed. They removed the word “immigration.” That’s it.

As we said before, though, the message doesn’t make much sense.

Heaven may have strict rules, but the entire message of Christianity is that literally anyone can come inside… as long as they meet certain requirements. It’s not meant to be an exclusive club that bans people from certain countries or shuts them out because they’re currently suffering. Heaven is more inclusive than the U.S.

As for Hell having open borders… well, that ought to be good news for anyone who’s in it since they can apparently just go in and out as they please.

If anything, the sign is just a helpful Christian way of letting strangers know that the people inside are bigots. Enter at your own peril.

(Thanks to Amy for the link. Portions of this article were published earlier) 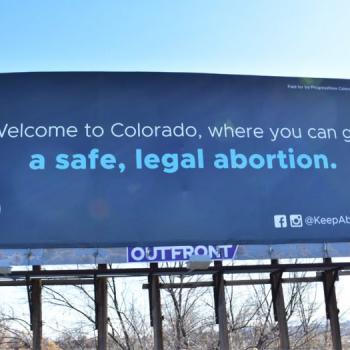