During an interview on the WallBuilders Live radio show this morning (hosted by Christian pseudo-historian David Barton), Creationist Ken Ham claimed it was a violation of the First Amendment for public schools not to take their students on field trips to Ark Encounter or the Creation Museum. As if not exposing them to fundamentalist Christian mythology is a disservice to kids. 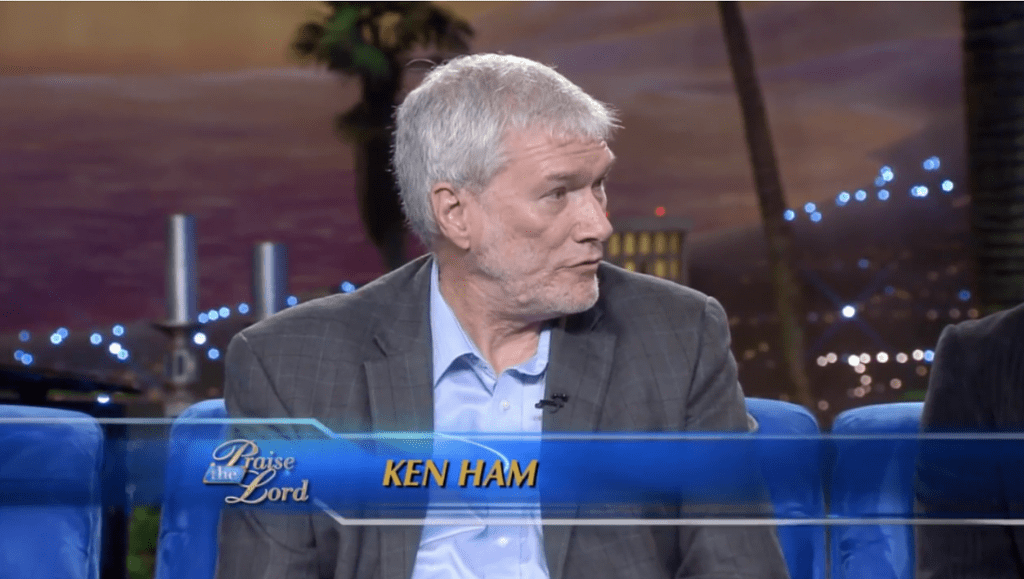 The remarks begin around the 13:18 mark. See if you can follow Ham’s unfocused rant.

… these people [atheists] are so scared that these students would actually hear some different thinking, that they threaten them this way. So the way I responded was to offer any public school that brings students on a field trip to the Creation Museum — now, to do it in accord with the Constitution, and that is this: That they are to do it as an educational trip, you know, a field trip, to learn other perspectives about science and history outside the context of the classroom, they can do that.

And under the First Amendment, they can certainly do that, provided the teacher is not promoting, or the school is not promoting, what they’ll call religion. Although they teach religion in their science classes, anyway. It’s called evolution. It’s called naturalism. But provided they don’t promote it and say, “You have to believe this,” if they just say to them, “You’re gonna go on a field trip, and it’s an educational field trip, to get a different perspective, and to see what they believe, and so on, to see how they present their message, and so on,” they’re well within their rights to do it.

In fact, to not do that, and to say you can’t do that, is actually against the Constitutional rights of the students themselves, depriving them of [the] opportunity to experience or engage and challenge with other perspectives, because it’s been ruled over and over again in the courts that, you know, you are not to promote religion in the public schools, and not to inhibit it either!

Ken Ham makes the same mistake in defining “education” as he does “science” and “history.” He thinks if you just call his mythology by those words, it’s fair game for public schools, not understanding that science comes with a set of principles that Creationism doesn’t meet.

Telling kids the Earth is flat is neither educational nor an alternative perspective on the world. It’s misleading and harmful. The same goes for the lie that vaccines cause autism or that we never landed on the moon. Your conspiracy theory doesn’t qualify as a curricular mandate.

Ham has been beating this drum for a while now, especially after the Freedom From Religion Foundation and American Atheists sent letters to Kentucky superintendents reminding them that field trips to the Christian theme parks would be an illegal promotion of religion. (Not taking them is absolutely not an inhibition of religion; students are welcome to express their own beliefs and visit the Creationist money-grabs on their own time.)

No actual scientist is debating the validity of Creationism. It’s not science. It’s not education. It’s not worth students’ time. There’s no academic reason to take kids to his parks. Only religious ones. That’s why it would be illegal.

Creationists loves to say that teaching evolution amounts to promoting naturalism or secular humanism, but that’s only because logic is foreign to them. Evolution, unlike Creationism, is backed by evidence. All the evidence. Plenty of Christians have found a way to work the reality of evolution into their theology, too. Ken Ham’s entire career rests on his inability to accept reality.

There’s no First Amendment violation taking place when schools take kids somewhere useful instead of Ark Encounter. But if any public school district wants to believe Ham and take their kids to the Creation Museum for a field trip anyway, maybe Ham should offer to cover the costs of any lawsuit that would result from it. He seems fairly confident he’ll win. So what does he have to lose?

February 19, 2019
The Catholic Church Admits There's a Guidebook for Priests Who Have Children
Next Post