It’s not just conservative Christian bakers and florists who discriminate against gay customers. Accountants are joining the mix.

For years, Bailey Brazzel went to Carter Tax Service in Indiana because she had a good rapport with the owner, Nancy Fivecoate. This year, however, when Brazzel came in with her wife Samantha — they were filing a joint return for the first time since getting married in July — Fivecoate refused to help with their taxes.

“I am a Christian and I believe marriage is between one man and one woman,” said Fivecoate. “I was very respectful to them. I told them where I thought she might be able to get her taxes prepared.”

“At first we thought she was kidding,” she said. “But when she started talking about the Bible, we knew she was serious — and I was completely shocked.”

”The LGBT want respect for their beliefs, which I give them,” said Fivecoate. “I did not say anything about their lifestyle. That’s their choice. It is not my choice. Where is their respect for my beliefs.”

Yeah! Why won’t those LGBT show some respect for her bigotry?!

Keep in mind Fivecoate likely has no problem doing taxes for straight people who sin in a variety of other ways. But a same-sex relationship, as Jesus made clear in some-book-of-the-Bible-I’m-sure-of-it, is a special sin among many Christians.

Unfortunately, there’s not much Brazzel can do at this point since Christian discrimination is perfectly legal in their town of Russiaville. Nearby cities, like Kokomo and Indianapolis, have non-discrimination ordinances, but not hers.

One law professor even said the best recourse in this case would be public shaming, since the courts aren’t going to help.

Steve Sanders, an associate professor of law at Indiana University’s Maurer School of Law, said the lack of statewide LGBT protections has led to a glaring incongruity that leaves discriminated gay couples powerless to do anything to defend themselves.

“The only recourse is good-old fashioned shaming — going on Facebook and telling their friends this is a discriminatory business and people might want to think twice about visiting,” he said.

Smart idea for now. Fivecoate doesn’t have much of an online presence, but there are plenty of negative reviews left here. She could help everyone out, too, by just posting a sign on her front door explaining how she refuses to work with gay couples. Straight people, too, deserve to know who they’re giving their money to, and a bigot like her can deal with the consequences of her actions.

If she doesn’t like the backlash, just let her pray about it. 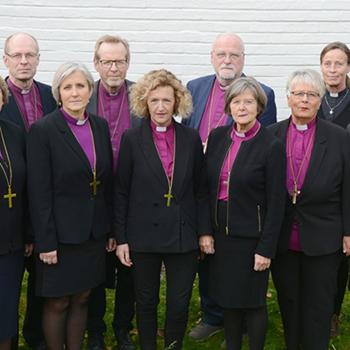 February 18, 2019
The Church of Norway Just Apologized for Its Inconsiderate Anti-Abortion Stance
Next Post