Over the past week, Arizona State Sen. Juan Mendez has alerted the public to a disturbing government program that funnels money from the specialty “In God We Trust” license plates to the anti-LGBTQ Christian hate group Alliance Defending Freedom.

That knowledge is not transparent on the state’s website, and Mendez has filed a bill that would create a public database informing people about which groups benefit from those fees. He also filed another bill to remove plates that fund hate groups from the special program. 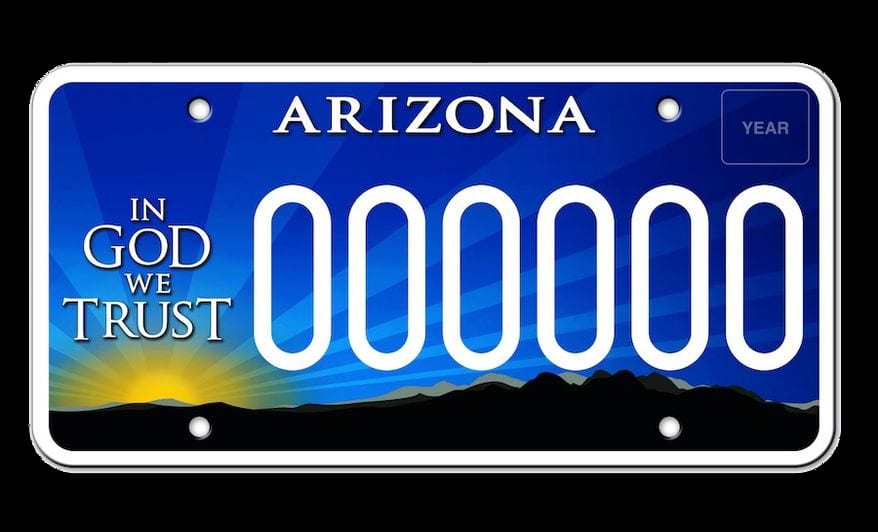 Naturally, conservative Christians are furious about all this. The ADF had a pretty good thing going for more than a decade, receiving more than $1 million from those license plate fees. Mendez telling people about it — and his bill that would make that information public — could limit the number of people who get that plate or renew the one they have.

ADF denounced Mendez’s bills — or at least one that would block them from getting funds — by citing their First Amendment rights. They also trashed the Southern Poverty Law Center. It’s possible they have a case that all non-profit groups should be eligible for that license plate program no matter what they believe, but I find it interesting that they have nothing to say about the public database. They never welcome the opportunity for citizens to find out where their money is going.

It’s almost like they enjoy staying under the radar…

Secular Coalition for Arizona has the same opportunity as any other non-profit group to create a license plate that expresses their view. Rather than shutting down speech, they should add to the conversation with their own perspective. That’s how free speech works in this country. Arizona is well within its rights to offer its citizens an opportunity to voluntarily purchase license plates affirming the First Amendment and contributing, in this case, to the pro-bono work ADF does to protect freedom of speech, religion, and conscience for all Americans. The way to counter speech you disagree with is not to use the government to banish a message like ‘In God We Trust,’ but simply to speak your own view.

Their statement falsely implies that an open forum ought to be enough for everyone. Don’t like it? Make your own plate! But censorship isn’t the concern for the Secular Coalition for Arizona (which worked with Mendez on this issue). They’re concerned that a hate group — one that works to curtail the rights of LGBTQ people — is the beneficiary of a government program. ADF merely responds by saying they’re not a hate group… because they said so. (bullies never think they’re bullies.)

Notice that they, too, never say the transparency bill is a good idea. Instead, an essay from the group’s president, Cathi Herrod, suggests everyone already knows where their money is going:

A quick look at the Department of Transportation’s website shows a menu of close to 70 specialty license plate options — every one of which offers individuals a chance to voluntarily give $25 toward a cause of their choice in exchange for a specialty plate. Ranging from professional sports teams and universities to the Boy Scouts, Girl Scouts, and more, every one of the plates gives Arizona drivers the ability to partner with a mission they love.

That’s what Mendez wants to change. That’s what these groups are fighting against.

Why are they so afraid of people finding out where their money is going?

February 13, 2019
The People Behind God's Not Dead Are Making a Film About Planned Parenthood
Next Post

February 13, 2019 New TBS Series "Miracle Workers" is Like "The Office" Set in Heaven, and It’s a Hoot
Browse Our Archives
What Are Your Thoughts?leave a comment