Virginia State Sen. Charles Carrico is one of several Republicans across the country to introduce a Project Blitz-inspired piece of legislation to push the Bible in public schools. His bill, SB 1502, would force public school districts in the state to offer Bible courses to students. While the bill calls for religious neutrality, forcing such classes on districts — regardless of student interest — already shows favoritism towards Christianity.

His Democratic colleagues actually called him out on that during a debate on the senate floor. State Sen. John Edwards pointed out that there are a number of religions that are non-theistic, so promoting God in school violates both the First Amendment and the Virginia Statute for Religious Freedom (written by Thomas Jefferson). Carrico, not surprisingly, said his bill violated neither one… because lying in the name of Jesus is always permitted.

But then, near the end of the video below (at the 4:26 mark), State Sen. Janet Howell asked a simple question: Would Carrico back a similar bill to teach the Qur’an in schools?

His response? Hell no.

HOWELL: I would ask the senator: If we bring a bill next year for the Qur’an, will he vote for it?

CARRICO: I would answer the gentle lady that, no, I will not vote for it, just like she won’t vote for this one.

He acted like it was a mic drop moment. It wasn’t.

She’s not voting for his bill (or, I would imagine, the one she suggested) because there’s no reason for public schools to act like replacement Sunday Schools. Leave the religious education to families and churches. Let districts spend their money hiring educators in classes students actually want to (or need to) take.

He’s not voting for her bill because he’s a Christian nationalist.

Lowell Feld, the excellent blogger at Blue Virginia, notes that Carrico doesn’t care much for religious pluralism. He even walked off the Senate floor yesterday during an invocation by a Muslim representative from the Dar Al Noor Islamic Center.

Unfortunately, Carrico’s bill has already passed the Senate. It’s now in the House, where Republicans have a narrow edge. If it passes there, it will go to the governor for a signature… though, right now, who the hell knows who that will be? 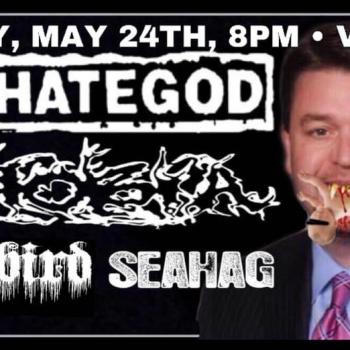 February 6, 2019
AR State Sen. Jason Rapert Is Furious About This Fake Photo of Him Eating a Baby
Next Post

February 6, 2019 I'll Be Delivering My First Invocation Next Month
Browse Our Archives
What Are Your Thoughts?leave a comment