Catholic leaders throughout Texas this week released hundreds of names of priests accused of sexually abusing young children over the past few decades, names which should have always been public. 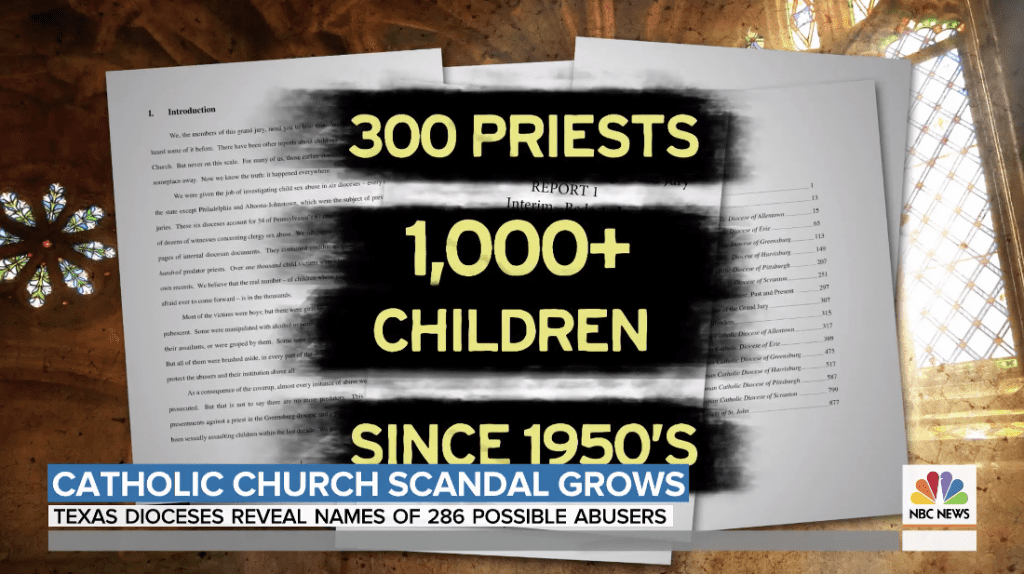 The disclosure of the 286 names represents the largest such release since the Pennsylvania grand jury report that rocked the country, according to the Associated Press.

In Texas, the Diocese of Dallas and some others relied on retired police and federal investigators to review church files and other material to substantiate claims of abuse. It’s not clear whether any of the names released Thursday could result in local prosecutors bringing criminal charges. The majority of those identified have since died. Some investigations dated back to 1950 while other reviews, as in the case of the Diocese of Laredo, only went to 2000 because that’s when that diocese was established. Of the 286 men named in Texas, 172 have died, a percentage comparable with the national tally.

“Our office stands ready to assist local law enforcement and any district attorney’s office that asks for our help in dismantling this form of evil and removing the threat of those who threaten Texas children,” said Marc Rylander, spokesman for the Texas attorney general’s office. “To date, we have not received any such requests, but we are ready to provide assistance to local prosecutors in accordance with state law and original criminal jurisdiction.

Cardinal Daniel DiNardo of the Archdiocese of Galveston-Houston said the bishops “decided to release the names of these priests at this time because it is right and just and to offer healing and hope to those who have suffered”… but they conveniently didn’t do that until the public pressure became overwhelming. Better late than never, I suppose, but if these were credible allegations, sweeping them under the rug until the alleged perpetrators were dead or the statutes of limitation had expired, doesn’t do anything for the victims seeking closure and justice.

Maybe some will find solace from these disclosures. But many more could have found it had the names been released earlier.

February 1, 2019
Please Support the Work I Do Through This Site
Next Post