Presidential Candidate Sen. Kamala Harris Must Reach Out to Non-Christians, Too

During her official campaign launch yesterday, Sen. Kamala Harris made sure Christians knew she was one of them before making the big announcement.

With faith in God, with fidelity to country, and with the fighting spirit I got from my mother, I stand before you today to announce my candidacy for President of the United States.

To be clear, she’s fine on church/state separation issues. She’s not an activist for it by any stretch of the imagination, but she supports it in principle. “With faith in God” was also obviously a comment about her personal beliefs, not a blueprint for how she intends to drive policy. No one’s ever going to mistake her for someone like Ted Cruz, who made his presidential announcement in 2015 at Liberty University.

But it’s telling how even someone who’s considered one of the strongest Democrats in the field still feels the need to bring God into the mix during one of the most important speeches she’ll give over the next two years. It’s not that she needs to ditch God; it’s that she had the opportunity to reach out to non-religious Americans — an ever-growing part of the Democratic base — and blew it.

At the very least, she could’ve done what President Barack Obama did during his first inaugural address. When he talked about religion, he referred to the fact that “we are a nation of Christians and Muslims, Jews and Hindus, and non-believers.” He didn’t treat his own religion as better or different from anyone else’s.

That doesn’t mean Harris can’t improve. I hope she does.

That said, if she’s the nominee, she’ll still have my vote. I’m not an idiot. I’ll do whatever it takes to defeat Donald Trump and every other Republican in public office because that entire party needs to be destroyed from the top down. Just because I don’t love the rhetoric Harris uses is no reason to write her off. I’m not that selfish, and she’ll hardly be the only Democrat who uses religious language to speak to Christian voters.

What Democrats need to do is remember that Christians aren’t the only voters who matter — which the GOP routinely does through its platform and policies. A message that’s inclusive of progressive Christians, minority religions, and non-believers will go a long way. Democrats need our votes, too. They’ll have to do more than refer to God and deliver speeches at churches to get the “Nones” who don’t vote to change their habits in 2020. 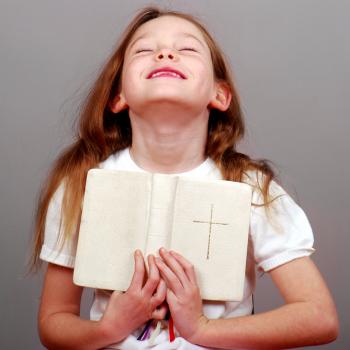 January 28, 2019 WV GOP's Education Bill Would Allow Public Money to Fund Religious Education
Browse Our Archives
What Are Your Thoughts?leave a comment