With Second Lady Karen Pence working at an anti-LGBTQ Christian school, it’s a good time to shine a spotlight on what students actually learn at these private schools. Sure, many of them never understand evolution and get a warped understanding of sex, but how bad can it really get?

The hashtag #ExposeChristianSchools, started by “Exvangelical” Christopher Stroop, offers a disturbing look at what many former students are saying.

Let's also discuss how a friend of mine who passed the entrance exams to a very good christian school in Lagos, was told to her and her mother's face that she wasn't granted acceptance because her mother was a single mother. "No broken families".
#ExposeChristianSchools

I don’t know if I can properly address all the ways to #exposechristianschools. But here it goes. History classes never reviewed the American Indians’ cultures or the timeline of the Civil Rights Movemenet. Yay white-washed history. �

#ExposeChristianSchools The bullying was intense, specifically for boys who weren't "manly". In the locker room, coaches would walk out when "soft" boys were getting towel-whipped in the shower or heads flushed in the commodes.

Alright, #ExposeChristianSchools is trending, and I have FEELINGS. Mandatory marriage & family class, (hetero pairs only, obv). Boys drew occupations out of hats (wife wasn't allowed to work). Boys wrote the budgets. I got a C & all I did was name the kids (also mandatory).

Had this same book given to me in 5th grade. so gross #ExposeChristianSchools https://t.co/jJtUlrgZ5b

When I promoted one of my students of color to the next grade, I was overridden because they wanted to “spread out” the children of color and there was already a POC in the class a grade above. They held my kid back and told his parents he didn’t pass. #ExposeChristianSchools

In my biology class we weren’t allowed to say “tailbone” because of its evolution-based connotation. #ExposeChristianSchools

From grades 5-8, we read weekly fake newspapers called “Gods World News”, highlighting the atrocities the outside world was engaging in. This is how I first learned what the ACLU was. Every story mentioned them specifically and harped on how evil they were #ExposeChristianSchools

My Christian middle school praised the Birmingham, AL abortion clinic bombing in the late 1990's. (The school was in a suburb of Birmingham.) #ExposeChristianSchools #EmptyThePews

My “sex education” teacher (the same under-qualified teacher who taught geography and biology) told us that sex creates an unbreakable blood bond, which is A) false and B) convinced me that I was forever bound to my abuser. #ExposeChristianSchools

When I told the principal of my Christian high school I wouldn't live at home anymore because I was being physically and sexually abused, he told me I was going to hell for disobedience to my family #ExposeChristianSchools

In elementary school we were taught that non-Christians were incapable of real love.#ExposeChristianSchools #ChristianAltFacts

We were repeatedly told that going to a Christian school was a privilege. That if we went to public school, we'd become drug addicted pregnant athiests because the Liberal agenda was out to get the youth…#ExposeChristianSchools

There are more than 20,000 tweets where those came from.

To be fair, some of them are positive. Some people are using the hashtag to share good experiences they had at these places… which is kind of shouting #NotAllChristianSchools. No one’s saying every school is like this, but the problem is pervasive enough that literally thousands of people have similar horror stories to share. People like Pence’s defenders should listen instead of interrupting. Maybe they’d finally learn something useful. 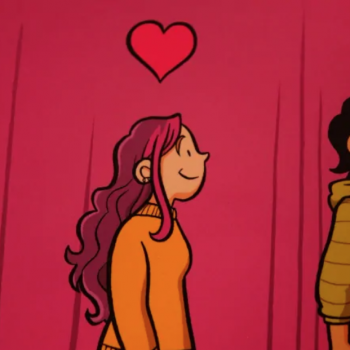 January 20, 2019 Book with Same-Sex Kiss Will Return to Catholic Schools' Libraries Despite Ban
Browse Our Archives
What Are Your Thoughts?leave a comment