Covington Catholic High School in Kentucky is a place where students are taught to “embrace the Gospel message of Jesus Christ” and get educated “spiritually, academically, physically and socially.”

It’s not surprising that students at a school like that would’ve made a trip to Washington, D.C. for the anti-abortion March for Life yesterday. At the same time, there was an Indigenous Peoples March taking place. And that’s where the two groups apparently collided. A viral video shows a student who appears to be from Covington (though that hasn’t been definitively confirmed), with a MAGA hat on his head, grinning like an idiot in front of a Native American man performing a chant.

When the camera zooms out, you see an even larger mob of students mocking the man. Some of those students are wearing Covington gear, which is why people have connected them to the school.

It’s even worse when you see the full mob effect. pic.twitter.com/Oe7Zn5srOB

Setting side the absolute disrespect, there’s an irony in the fact that these boys were mocking Nathan Phillips, a Vietnam veteran who served this country proudly in a way the MAGA hat-wearers only think they do.

The school hasn’t issued any kind of statement yet. In fact, they took down their Facebook page after the video began spreading and their Twitter account has gone private. (Are you surprised? The Catholic Church isn’t exactly known for its transparency…) The Roman Catholic Diocese of Covington only issued a brief statement Saturday afternoon: “We are just now learning about this incident and regret it took place. We are looking into it.”

[UPDATE 1/21: The school and diocese have now issued a joint statement.]

I don’t believe a school should be punished for what one awful student does on camera, but when you have several students participating in this kind of holier-than-thou taunting of a Native American — while in D.C. for a march celebrating “life” — it tells you that their communities never taught them respect or manners and their teachers never educated them about the contributions of Native Americans or how our government continues to mistreat them today (even suppressing their right to vote in some places). How will the school and Diocese respond if these boys really are students there? How seriously will they take this display of ignorance and cruelty?

Critics have also long pointed out the hypocrisy of a “pro-life” movement that doesn’t give two shits about people who are actually living. Most of them aren’t fighting for LGBTQ rights, they’re not tackling income inequality, they’re not opposing Donald Trump‘s racism-stoked border wall. Hell, they cheered for Mike Pence at yesterday’s rally. But this incident is just the latest example of students claiming to be “pro-life” while demonizing people who risk their lives to make this country better. They wear MAGA hats and do shit like this while whining about how kneeling during the National Anthem is disrespectful.

Religious hypocrisy has never been so obvious.

Every parent who sends money to this school should ask for a refund — or pull their kids from the school next year — given that this incident is what their child will now be associated with. 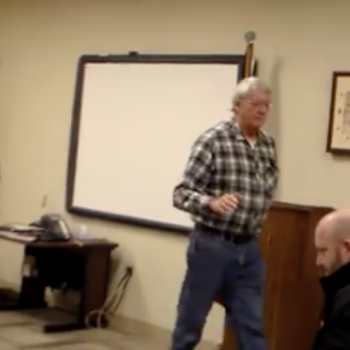 January 19, 2019
Iowa County Official Walks Out of Meeting As Pledge of Allegiance is Recited
Next Post 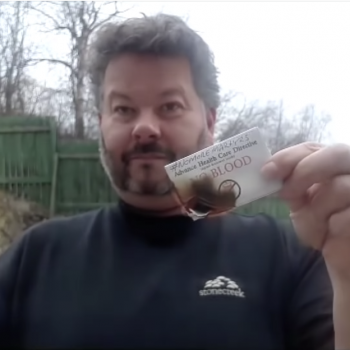 January 19, 2019 These Ex-Jehovah's Witnesses Are Destroying Their "No Blood Transfusion" Cards
Browse Our Archives
What Are Your Thoughts?leave a comment