He didn’t go after their policies. Instead, he trashed them for cohabitating with a partner without being married, marrying a man who had a child from a previous relationship, being a lesbian (or as he put it, “LESBIAN”), officiating a same-sex wedding, being a single mother with a lesbian daughter, and being Muslim. (Just being Muslim.)

But the guy who has five children with three wives and paid hush money to two of the women he had affairs with is still the Great White Hope.

It’s not surprising Peterson is digging for anything he can use against these proudly outspoken congresswomen. He doesn’t want to see women in public office. Hell, he once said in a sermon that women shouldn’t even have the right to vote.

The funniest thing about the tweet is that he tagged all those women… except Alexandria Ocasio-Cortez, who has been extraordinary at mocking her dumbest conservative critics. Maybe he didn’t want to face her wrath. Or maybe he couldn’t spell her Twitter handle.

In any case, his tweet is spreading. That means, for many newcomers, this is the only thing they’ll ever know about him… which is good because it’s a perfect encapsulation of his hypocritical, bottom-of-the-barrel mindset. 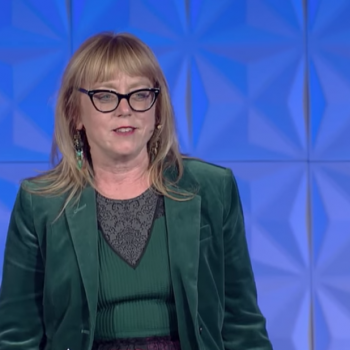 January 16, 2019
This Liberty University Professor is a #NeverTrumper in a Sea of Trump Backers
Next Post

January 17, 2019 AR State Sen. Skips Hearing in Atheist Lawsuit, Insists It's a "Frivolous" Case
Browse Our Archives
What Are Your Thoughts?leave a comment