An elected official in Texas saw a Facebook post about a mosque being built and couldn’t help but attack Muslims.

Winkler County Commissioner Hope Fernandez Williams, a registered Republican who entered office in 2017 and can be contacted right here, was responding to a post about a new mosque being built in Midland when she chimed in with what one news station referred to as “her dislike of Muslims.” 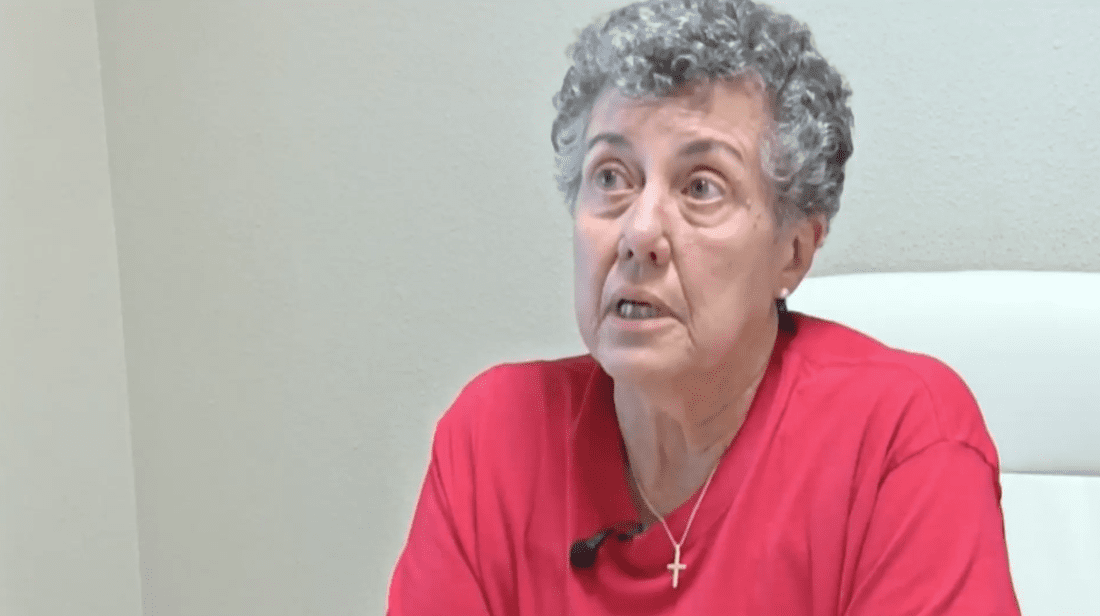 Specifically, she treated all Muslims as if they were terrorists, suggesting they would be set off if she just built a BBQ joint next door… or maybe a “gay strip club.” She went on to claim Muslims (all of them, apparently) “deny the Holocaust ever existed.” She also insisted she has Muslim friends… though they just happen to keep quiet about their beliefs.

[Update: She deleted her posts. I guess she forgot that screenshots exist…] 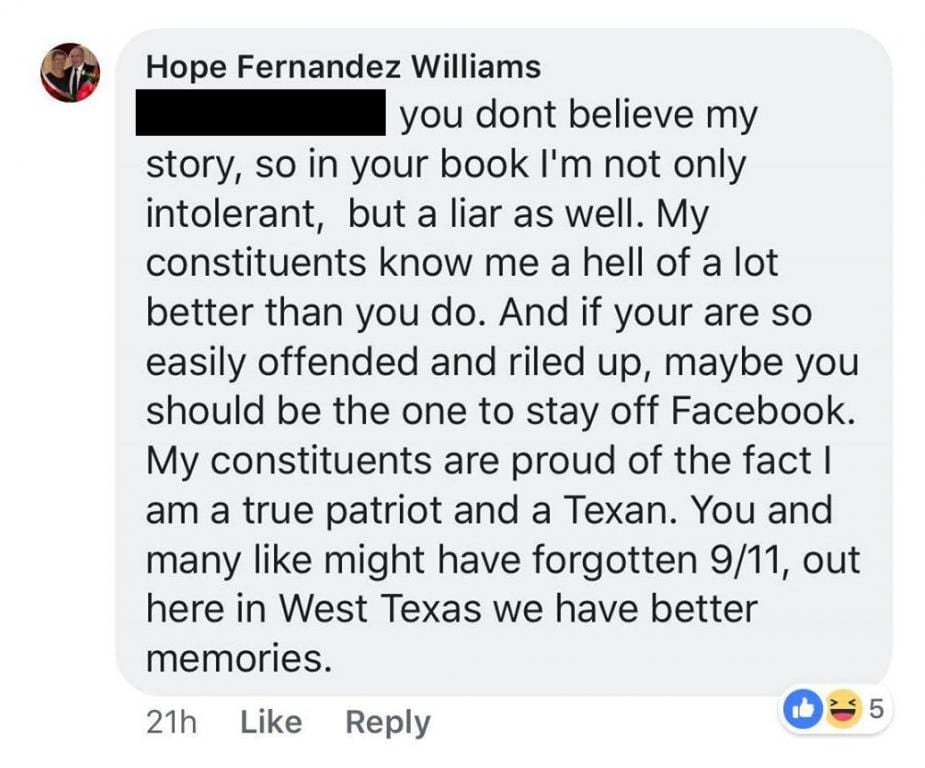 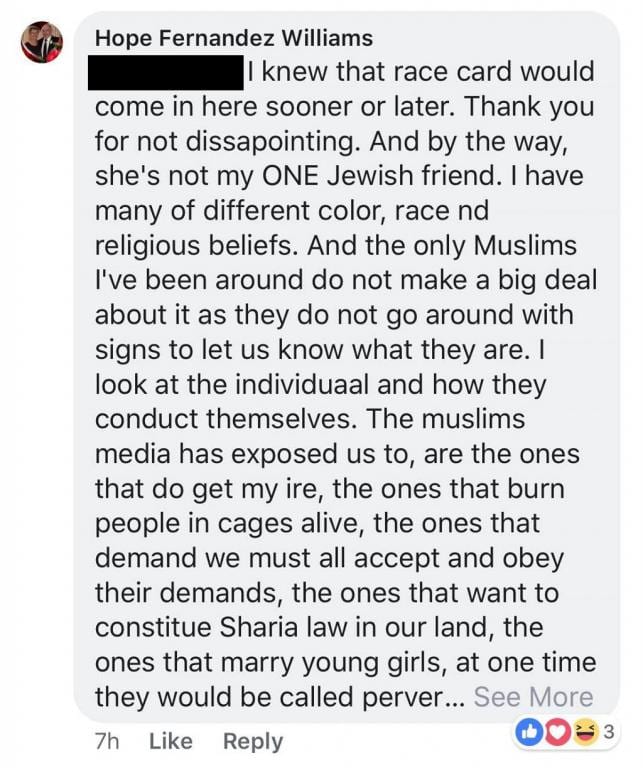 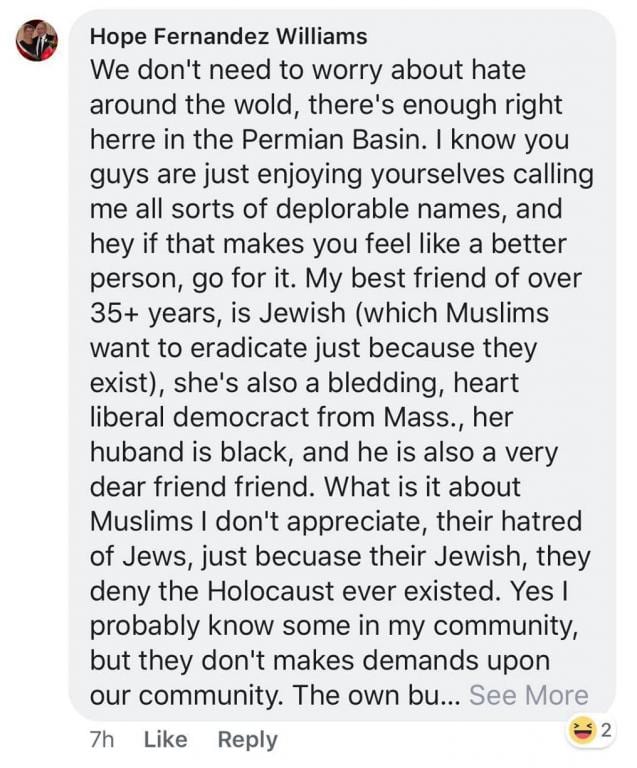 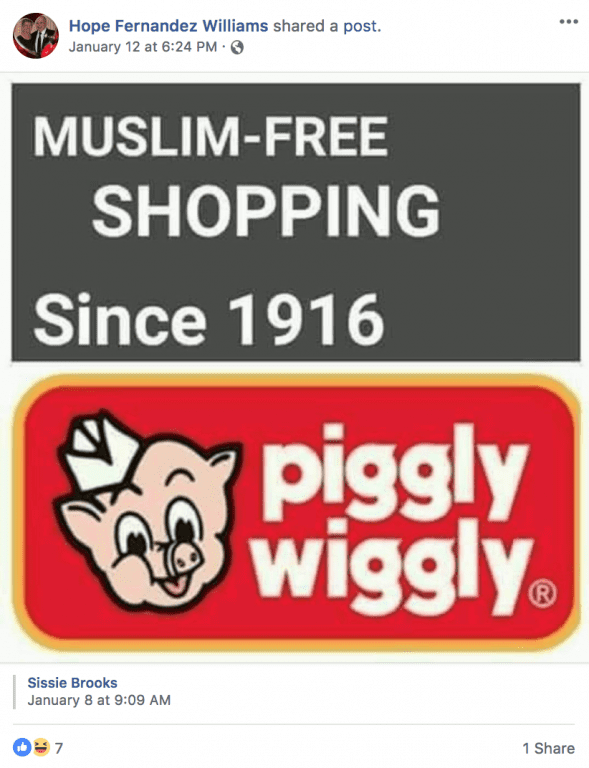 You can take a guess how she’d react if a Muslim official suggested we build a gay strip club next to a brand new Baptist church… (Though I’d find that problematic, too.)

Fernandez Williams is welcome to hold her bigoted views as long as they don’t interfere with her work, but when she stereotypes and degrades others’ faiths on public forums, she’s already bringing that grudge to a place where it doesn’t belong.

The fact is that many Muslims wouldn’t care about worshiping near a Texas barbecue joint, just as they don’t care if people are gay. (In fact, there are even… gay Muslims. *gasp*) There is no evidence to suggest this particular mosque would be a gathering place for extremists or that local leaders would protect anyone that was.

Not that she cares. One commenter even asked the politician, “What would Jesus think of your intolerant behavior?”

In the comment thread, Fernandez Williams claimed her comments were “sarcasm.” But she doubled down on the offensive statements: “You and many like might have forgotten 9/11, out here in West Texas we have better memories.”

She also added in one comment that she voted for Donald Trump and “will do so again.” (I know. Shocking news.)

Fernandez Williams has posted anti-Muslim images on Facebook before, but this is the first time it has made the news. The question now is whether any of her constituents will care enough to vote her out at the next opportunity.

(Thanks to Sammi for the link) 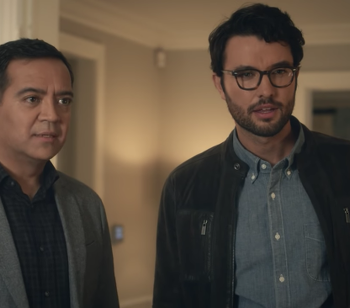