A 2015 sculpture of a crucified Ronald McDonald — called “McJesus” by artist Jani Leinonen — created a stir over the weekend at Israel’s Haifa Museum of Art. On Friday, hundreds of Arab Christians clashed with police over what they claimed was an offensive piece of art that mocked their faith. 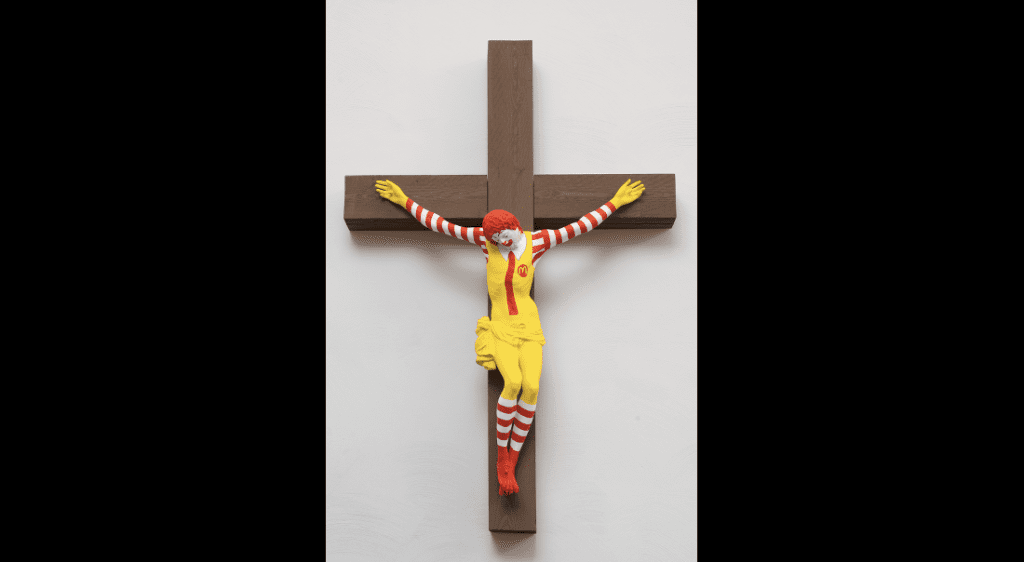 Video from the demonstration showed scuffles as police used tear gas and stun grenades to clear the protesters.

One of the protesters complained that the government was slow to react to their concerns because they were from the Christian minority. “If they put up [a sculpture of] Hitler with a Torah scroll they would immediately respond,” he told the Walla news site.

The sculpture has actually been in the museum since August, as part of an exhibit featuring the intersection of religion and modern culture. Even the government has lobbied for the museum to take down the supposedly blasphemous sculpture:

“Disrespect of religious symbols sacred to many worshipers in the world as an act of artistic protest is illegitimate and cannot serve as art at a cultural institution supported by state funds,” she wrote.

To their credit, the museum officials didn’t budge, though they did agree to put up a sign warning people about the potentially “offensive” pieces of art in the exhibit. (That could theoretically go up at the front of the museum, too. And libraries. Or any place where discussions about religion are allowed to take place.)

The irony here is that McJesus, to many observers, is less about Christianity than it is about the unearned reverence we give to a global fast food company. It’s not attacking religion. It’s attacking McDonald’s and society at large. The protesters either don’t know that or they don’t care. Their knee-jerk response to religious imagery turned their brains into mush so they’re incapable of thinking rationally about what they’re looking at.