A Radio Host Is Upset By My “Spiritual Warfare” on the Evangelical FedEx Driver January 14, 2019 Terry Firma

Christian radio host and podcaster Frank Sontag is, if you’ll forgive the dad pun, cross with me. To my muted amusement, he called me various names the other day, because he takes umbrage at my recent post about Amanda Riggan. Sontag even accused me of waging “spiritual warfare” against her.

Riggan, you may recall, is the FedEx driver who recorded a Facebook video last week in which she signals what a paragon of Christian virtue she is for interrupting her route by returning to a customer who was distressed by the sickness of a spouse. Riggan offered to pray with her.

The blubbering video that she subsequently recorded in her FedEx uniform, sitting in her FedEx truck, has to be seen to be believed. It’s closing in on 20 million views.

Like innumerable other Christers, Sontag thinks that what Riggan did is exemplary behavior that fellow believers should emulate. While I acknowledge the young driver’s good intentions, I beg to differ, for these seven reasons (if you already read my previous post about this, skip the recap):

1. It’s a delivery driver’s job to bring us our packages, not the gospel.
2. Most people don’t like religious solicitors. My own considerable aversion to their ilk would easily double if such a person returned to my doorstep upon sniffing out my personal grief, judging it to be a fertile time for some Jesus talk.
3. Intended kindness notwithstanding, the driver revisited a woman who hadn’t asked to be set upon by Riggan and her exceedingly pushy brand of evangelism.
4. Other customers were waiting for their deliveries while Riggan doubled back to offer to pray.
5. Double standards are annoying. Conservative Christians all over the country would absolutely lose their shit if Riggan had been a Muslim who offers unsuspecting FedEx customers the eternal truth about Allah.
6. Unless she got prior permission from her bosses (Ron Howard voice: “She didn’t”), Riggan had no business using FedEx’s resources, matériel, and branding to promote her religion.
7. With regard to Riggan’s video, no one likes a braggart, except for Christians who think nothing of openly disregarding the various verses in the Bible that condemn public, ostentatious, self-aggrandizing prayer.

I expected that in the course of a call-in radio show that lasted the better part of an hour, and that was almost entirely devoted to my post, I’d eventually get to hear some halfway decent counterarguments. Alas. It’s par for the course that where I see Riggan’s video performance as self-promotion and vanity, Sontag and his listeners see selflessness and courage. Moving beyond that radical difference in interpretation, the program essentially turned into a slow-building collection of schoolyard epithets: “vile” “miserable,” “lying,” “hater,” “bully,” “disgusting,” and so on (there’s that much-heralded Christian love again!). No one, not even the host, rationally addressed the central points of my piece.

And I’m still in the dark about how I ostensibly “lied” about Riggan. The video is here for all to see.

To twist this video the way that this blogger twisted it is — well, I see it as a red flag. We tend to look the other way as the body of Christ. I’m not necessarily condoning violence but when a great white shark is coming at you, experts says you’ve got to punch it in the nose as hard as you can and it’ll swim away like a little guppy.

The closest he comes to an attempt at a rebuttal is when he denies that he, personally, would’ve been pissed if a Muslim FedEx driver had done the same thing as Riggan. Sontag’s response:

I could give a rip. Fine! That’s OK! But that’s just another perspective of people who don’t truly know the one true God!

Various parts of the show similarly cracked me up, especially Sontag’s hopelessly confused conflation of the Freedom from Religion Foundation and Friendly Atheist. He believes that the FfRF and FA are one and the same, and erroneously gives the web address of the former in response to a caller who wants to comment online on my post.

The reason I know why this particular blogger is with [the FfRF]: His logo is their logo.

This is bizarre. There is literally no resemblance between the two logos or type treatments. The A in Friendly Atheist is in no way a trademark held by the FfRF. And while I’ve made the occasional small donation to the FfRF, many moons ago, I don’t believe I’ve ever talked to, e-mailed with, or in any way “interacted” with the FfRF’s headquarters, or with that fine organization’s current or former employees. (Not that there’d be anything wrong with that.)

[Hemant’s note: I interact with their lawyers frequently. We have a working relationship because I cover a lot of their work. We’re not linked together in any formal way, though.]

So we see again that at both the macro and the micro level, religionists need neither facts nor proof; they can just believe, and that’s all there’s to it.

There’s attacks [on Christianity] everywhere. The separation of church and state gives carte blanche to atheists and the Freedom from Religion Foundation to, more [often] than not, just tee off on Christians. That’s who they go after. When you go to their website, you’ll see that they give out a weekly or monthly “I’m Not Afraid to Go to Hell” award. Just vile.

I had to look that up. According to its website, the FfRF periodically gives out ten types of awards, none of which are even close to being called what Sontag claims. Even if there were such an award (or, let’s say, a digital banner or a T-shirt with that slogan), there’s nothing “vile” about saying you’re not afraid of hell. I suspect that Sontag and his audience are just irate that their cruel and violent fantasies — sinners burning for all eternity in lakes of fire — hold no power over non-believers.

To get the full flavor of Sontag’s show, here are some of the nuggets proffered by his call-in guests.

In this world today, in the times we’re living, it’s going to get worse. And we cannot expect unbelievers to understand; they don’t have the holy spirit. So I guess my emphasis is, we have to be on our knees praying because they don’t get it.

You know how our moms used to say that misery loves company? Joy comes from the Lord. Now, these people are without the Lord, so they’re without that joy. So they’re miserable, and they just want everybody to feel the way that they feel.

[The FA post about Riggan] is a direct attack on freedom of speech. They’re trying to shut Christians up any way they can.

I believe that this society of atheists are really ignorant. When they come after somebody like this, it’s because they don’t understand that there’s a God, but they’re the type to criticize other people. When somebody comes against you the way this ignorant person [me, TF] did, I just hope he doesn’t find himself in a position where he needs someone to pray for him, and then let’s see how — what he thinks.

I’ve been in a position where I’ve prayed for clients [when I was] working at a retail store — that needed, that I felt needed prayer. Consequently I was thanked by them, later on. … We’re the descendants of David, who took on Goliath! We just can’t let our religion or our belief system be danced upon!

Ann (who knows something about my gender identification that I don’t):

I’m a caretaker and I have worked with hospice patients. I’ve prayed with people, I don’t know their religion but I’d say, would you like me to pray? … That atheist, to me, is a hater. She’s very unhappy, she needs prayer, and she has too much time on her hands. But Amanda is darling.

I take every opportunity to share my life, ’cause I tell people [that] if there was happiness out there without Jesus, I would’ve found it. It’s not there. And if they get to that point where they’re hopelessly in never-never-land, I take every opportunity to share with them how God has changed my life. I pray with these people and I’ve had people come to the station and ask for me.

Only in Christian never-never-land is it no big deal for a worker on the public payroll to preach the gospel during work hours — as if the First Amendment and its Establishment Clause don’t exist or matter.

Maybe I should get acquainted with the folks at the Freedom from Religion Foundation. I presume that they’re content to let FedEx, a private company, deal with Amanda Riggan; but that they might have something to say about a lawbreaking cop with a badge and a gun who pushes Jesus on people at “every opportunity” while he’s on the clock.

That would be the kind of “warfare” I can get behind. 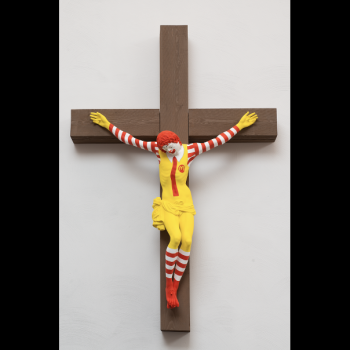 January 14, 2019 Jehovah's Witnesses Lawyer Demands Takedown of Documents from FaithLeaks
Browse Our Archives
What Are Your Thoughts?leave a comment