While the Republican-run federal government remains a sinking ship, there’s a lot of good news to be found in Democratic-run state governments. In Michigan, Gov. Gretchen Whitmer signed an executive directive prohibiting LGBTQ discrimination among state employees and job applicants. That includes people hired by outside groups working on a state contract.

Today at @GoAffirmations in Ferndale, I signed ED 2019-9 focused on strengthening non-discrimination in state employment, contracting, and services. This includes prohibiting discrimination based on sexual orientation and gender identity or expression. pic.twitter.com/BP8pBSMGLy

While her GOP predecessor Rick Snyder signed a similar directive last month before leaving office, Whitmer’s went further because it doesn’t include an exemption for religious organizations. So if the state hires a Christian non-profit group to provide services of any kind, that group can’t discriminate against LGBTQ people while using their faith as a legal shield.

“This action is deeply personal to me and I am grateful that Gov. Whitmer has made anti-discrimination one of her top priorities in her first several days in office,” Nessel said. “This is a step in the right direction and I am hopeful that soon our state laws will also reflect the paradigm of equal protection under the law for all Michiganders.”

There is one caveat here. We usually see this conflict between non-discrimination laws and “religious liberty” play out when states give funding to religious adoption centers and foster homes. Those groups, in turn, refuse to work with same-sex couples. Will the new Michigan directive resolve that conflict in favor of non-discrimination?

Tiffany Brown, a Whitmer spokeswoman, said the order can’t immediately prohibit an adoption agency that contracts with the state from refusing to allow a same-sex couple to adopt, on religious grounds, when such a case is already before the courts.

The governor cannot change a statute by executive directive,” Brown said in an email. “The courts will decide the … lawsuit.” Whitmer “respects the process and the rule of law, and ultimately the constitutionality of the statute will be decided by the courts.”

For now, then, the Christian groups are allowed to be bigots using taxpayer money. Hopefully that won’t last. They don’t deserve a reward from citizens for faith-based hate. 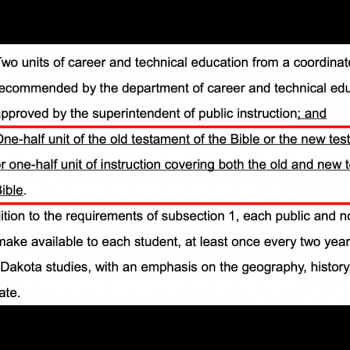