About three months ago, American Atheists filed a lawsuit against Arkansas State Senator Jason Rapert — best known to readers of this site for erecting an unconstitutional Ten Commandments monument outside the State Capitol — for blocking four residents on Facebook and Twitter.

The complaint stated that Rapert blocked the plaintiffs in part due to their atheism as well as their critical comments about his policies. Whatever the reason, AA’s argument was that a government official can’t block people from “participation in public forums” (including comment threads online) based on their viewpoints.

It may seem silly to go to the courts over a social media kerfuffle, but the truth is if Rapert blocks residents from his official social media presence, they’re unable to see what he’s doing on their behalf. Back in May, a federal judge ruled that Donald Trump also couldn’t block people on Twitter for those reasons.

On Friday, that lawsuit against Rapert was dismissed.

But that’s not because American Atheists lost.

In short, the local attorney hired to pursue this lawsuit on behalf of AA just didn’t work out. He didn’t file the paperwork he was supposed to. So with the judge’s permission, AA said they would drop the current lawsuit and then file a new one using a different attorney. The judge was fine with that and dismissed the old case “without prejudice” — meaning AA is welcome to file it again.

So this was nothing more than a temporary glitch.

Nick Fish, the President of AA, told me last night that the new version of the lawsuit would be filed in the “coming days.” In fact, they already have another local lawyer ready to go. That filing will also include one change. This time, they’ll include a complaint that says Rapert violated the plaintiffs’ “free speech rights under Article 2, Section 6 of the Arkansas Constitution.” (In the first lawsuit, they only claimed a free speech violation occurred under the U.S. Constitution.)

Really, the worst thing about this glitch is that the clock “starts over” on the whole case, which means it’ll take a little bit longer to resolve. That’s all.

How is Rapert handling all this?

Naturally, he’s claiming victory… at least for those who don’t want to read the fine print. He made a Facebook posting with the headline: “AMERICAN ATHEIST LAWSUIT DISMISSED AGAINST SENATOR JASON RAPERT.” Which is really just a misleading half-truth.

The rest of that post is a rant against AA’s former lawyer, a dismissal of the lawsuit as “frivolous,” and an attempt to cast himself as a Christian martyr who’s just taking the heat for Jesus. He also threw in a few jabs against women’s rights and LGBTQ rights and “radical” Muslims… even though those have nothing to do with the matter at hand.

I believe that those who file frivolous lawsuits against innocent people for any reason should be held accountable for their actions. I am seeking counsel on what our options are at this point.

In the end, for now, the American Atheists and their local puppets lost this battle. However, I know the American Atheists, the Freedom From Religion Foundation, the Satanic Temple, the American Humanists, Homosexual activists, the Council for American Islamic Relations (CAIR), Planned Parenthood & abortion activists and other liberal attack groups will continue their attacks against me for advocating the importance of Judeo-Christian values in the public square and launching the National Association of Christian Lawmakers.

I am going to keep advocating policies that honor God in America which is my right.

I am going to keep preaching the Gospel of our Lord Jesus Christ which is my right as an American citizen.

I am going to keep fighting the scourge of abortion and seek to overturn Roe v. Wade so that we can save the lives of unborn children.

I am going to keep fighting to overturn the horrible 2015 Obergefell v. Hodges decision and restore the honor of marriage between one man and one woman.

I am going to keep speaking the truth about the enemies of America that seek to destroy our nation through immorality and leftist ideologies.

I will continue to expose the truth about radical Islam and the anti-Semites who call America and Israel “the great Satan”.

Christ… after that, I want him to block me so I never have to read his garbage again. Or maybe not. I kind of want to see the persecution essay he’ll post after losing this case. 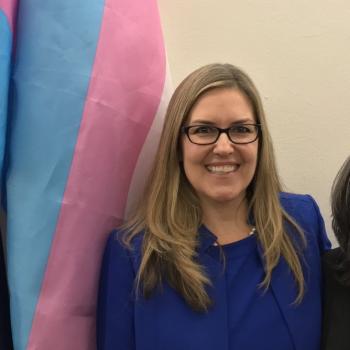 January 5, 2019 Ozark (MO) Will Move Large Cross to Private Land Days After Lowering Its "Arms"
Browse Our Archives
What Are Your Thoughts?leave a comment