Televangelist Frank Amedia, who has a long history of saying bizarre things and claimed just months ago that his prayers helped a baby grow 1.5 kidneys, said in a recent video that Donald Trump‘s Space Force was part of a plan to help Jesus return to Earth.

He made the comments during a year-end video message. There’s no one specific time-stamp, but during his rambling monologue, Amedia said that Trump’s whole administration and conflicts and the Space Force (specifically) were going to help bring about the Second Coming.

The Space Force also has divine significance, suggested Amedia, declaring that it is needed not only to protect the U.S. and Israel, but “to do war from that area.” He encouraged people to read Revelation to figure out what he was talking about:

I’m not going to get more into that now. Read Revelation. You read into it and see what you think. The Space Force and command was prophesied of God; somehow it centered into the spirit of this president and vice president, and the vice president himself is heading this up, and they’ve done a lot, they’ve made up a lot of ground in a year and a half. We need to see a lot more. We need to be a dominant space force in all the earth, and that will cause peace.

The Book of Revelation is the last book in the Christian Bible, and contains an apocalyptic vision of fantastical creatures and a cosmic end-times battle between good and evil that ushers in a victory over Satan, the wrathful judgment of God and a thousand-year reign of Jesus and his followers.

So… that’s comforting. A Trump supporter (whose views align with other supporters) thinks we’re in some cosmic battle in which the forces of good — somehow including Trump — must destroy the forces of Satan.

Ah well. Trump’s racism has led to a government shutdown, so I guess Jesus will have to keep waiting. 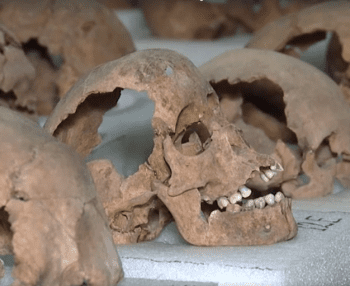