Ignoring Jesus, Jerry Falwell Jr. Dismissed What the Poor Give Back to Society January 4, 2019 Beth Stoneburner

Ignoring Jesus, Jerry Falwell Jr. Dismissed What the Poor Give Back to Society

Liberty University president Jerry Falwell, Jr. said in a recent interview with the Washington Post that there was nothing Donald Trump could do to lose the support of evangelical leaders. While that response — “No” — got plenty of well-deserved attention, it wasn’t the only answer worth dissecting.

In the same interview was another statement that is just as ridiculous as it is un-Christian, even by conservative standards.

It came when Falwell was defending the evangelical support for Trump despite all the hypocrisies that come with it. Falwell claimed they supported him only because of his policies, including the notion that Trump is a successful businessman.

Falwell may be surprised to learn that not only was Jesus himself impoverished, but the gospel of Mark also contains this story commenting on the worth of the poor:

Jesus sat down opposite the place where the offerings were put and watched the crowd putting their money into the temple treasury. Many rich people threw in large amounts. But a poor widow came and put in two very small copper coins, worth only a few cents.

Calling his disciples to him, Jesus said, “Truly I tell you, this poor widow has put more into the treasury than all the others. They all gave out of their wealth; but she, out of her poverty, put in everything — all she had to live on.”

In other words, a poor person’s small donation was proportionally more valuable than a rich man’s large donation. She was giving up more than the rich people. The idea that poor people should be encouraged to give what little they have to religious leaders is another question, but the point of this story is that the poor really do have a lot to give.

Yet, according to Falwell, it’s absurd (theocratic!) to think “public policy should be dictated by the teachings of Jesus.” Not only does that contradict the idea that Christians are called to follow Jesus in every aspect of life, it’s also shocking considering how often conservative Christians point to biblical verses to justify their irrational policy positions.

I’m not one to pull the “No True Scotsman” card very often, but let it be said that having a large platform to share your faith doesn’t automatically make you Christ-like. 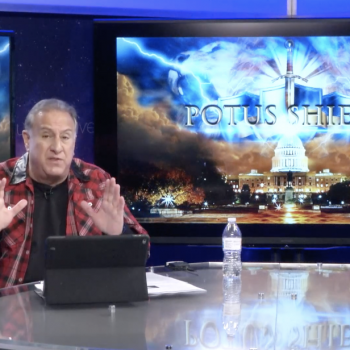 January 5, 2019 Anti-Gay Baptist Preacher Resigns from Church After "Being with Prostitutes"
Browse Our Archives
What Are Your Thoughts?leave a comment