Other than a handful of cancelled talks, this may be the first tangible consequence for Neil deGrasse Tyson following allegations of sexual misconduct — which he denies.

National Geographic announced today that Tyson’s show StarTalk would be removed from its lineup while an investigation proceeds.

“In order to allow the investigation to occur unimpeded we chose to hold new episodes of ‘Star Talk’ until it is complete,” a Nat Geo rep told Variety. “We expect that to happen in the next few weeks at which time we’ll make a final decision.”

What we don’t know is what this investigation looks like, who’s conducting it, or how thorough and independent it is.

The show, currently in its fifth season, had aired three episodes so far (out of 20 planned), the most recent new episode airing on November 26. We also don’t know if the second season of Cosmos, slated to premiere on March 3 on FOX, will go on as scheduled.

Should Fox and Nat Geo opt to part ways with Tyson, it would require time and effort to recut the show with a new host (such as, say, executive producer Seth MacFarlane).

The allegations were first made public by my colleague David McAfee. Tyson didn’t respond at first, but issued a public denial last month, saying he would offer his “full cooperation” in any “impartial investigation.”

January 3, 2019
Sen. Kyrsten Sinema Took Her Oath of Office on a Lawbook, Not the Bible
Next Post 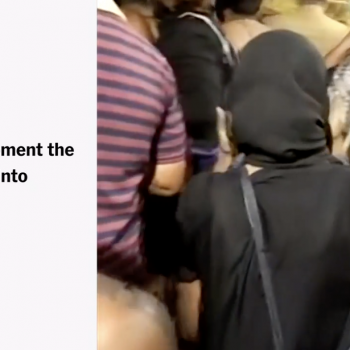 January 3, 2019 Two Women Sneak by Protesters into Hindu Temple, Prompting Riots
Browse Our Archives
What Are Your Thoughts?leave a comment