These 150 Cows Are Arranged in the Shape of a Cross. (Are You a Believer Yet?)

Gene Hanson, a North Dakota man who was praised by Donald Trump last year for an anti-Colin Kaepernick political message he plowed in his field, took a different approach recently to win praise from conservatives.

He snapped an aerial photo of his neighbor’s cattle feeding in the shape of a cross.

Gene Hanson, known for plowing political slogans in his farm fields, captured this photo of approximately 150 head of livestock being fed in a harvested corn field in the sign of the cross. The photo was taken north of Edgeley on the Richard Moch Ranch. https://t.co/fOHg0mUGow

I guess we should celebrate that no one’s even trying to call this cross pattern a “miracle” — maybe because Hanson’s neighbor said he purposely arranged them that way — but that won’t stop headline writers everywhere from dropping “holy cow” references.

Part of me wants to debate whether animals should be used for religious propaganda. But the rest of me is really curious about who could possibly be convinced by this.

Is someone looking at this picture and thinking, “I was on the fence, but now I’m a believer. Those 150 cows did what no pastor ever could”?

Now that would be a story. 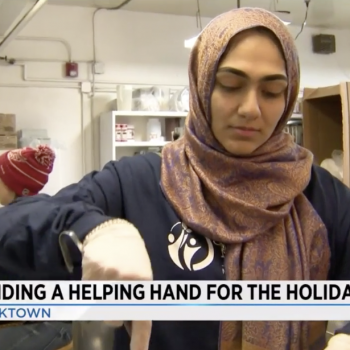