It’s quite an odd pronouncement coming from a Jewish man.

Prager rationalized his beliefs by claiming that, even though Christmas is not his personal holiday, it’s still a national holiday. Therefore not celebrating it means you hate America… or something like that. “Happy Holidays” is basically the greeting of traitors.

“This is the most important point,” he continued. “The notion that if you don’t celebrate Christmas or if you’re not a Christian, you are offended by it, it’s so preposterous that words fail me. Preposterous is an understatement.”

According to Prager, he would never be offended “as a Jew” by Christmas greetings.

First of all, most progressive aren’t “offended” by the phrase so much as they’re tired of strangers assuming that everyone they meet shares the same Christian faith. Also, Prager doesn’t speak for all non-Christians. (Nor does his “university” speak for actual places of higher education.)

Prager asserted that only people living in a “fairytale” could deny the “War on Christmas.”

Then call us fictional.

His reaction is precisely how I feel about those who do believe the “War on Christmas” propaganda — because that’s precisely what it is. I haven’t been to a single grocery or department store that hasn’t been playing Christmas songs since the week of Halloween. Pretty much every house on my block is decked out in lights, blow-up Santas, and Nativity scenes. Everyone from the Starbucks barista to the pharmacist who administered my flu shot has asked me what my Christmas plans are. None of it is offensive to me, and none of it is all that unusual. If there’s a War on Christmas, I’m apparently skipping over every landmine.

But Prager wasn’t done trashing the “Happy Holidays” crowd, suggesting that those who say the phrase are creating a “radically secularized” nation where we just let our fellow humans die in agony.

“They don’t like ‘In God We Trust’ on our coins, they don’t like Christmas as a national holiday,” Prager complained. “I fear a radically secularized America. I fear it. As a Jew, I fear it.”

“I know what happens when people no longer have a God-based frame of reference for their ethics,” he added. “Two-thirds of the high school kids I’ve asked in the last in the last 40 years, ‘Would you save your dog or a stranger if both were drowning?’ [They] won’t save the stranger because ‘I love my dog, don’t love the stranger.’ But if you have a Judeo-Christian value system, you know that people are created in God’s image, dogs are not.”

That is a preposterous scenario for a number of reasons, but I’ll point out that most dogs already know how to swim.

If you’re keeping track, though, not saying “Merry Christmas” probably means you want someone dead. If you follow that logic, then I guess that makes you a graduate of Prager U.

(via the New Civil Rights Movement) 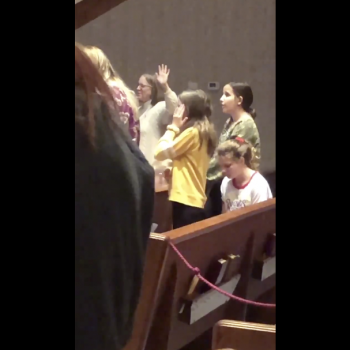 December 25, 2018
This Delightful Girl Perfected the Macarena During a Church Service
Next Post 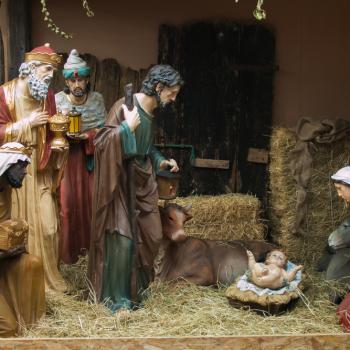 December 25, 2018 Across the U.S., the Baby Jesus Is Now Bolted Down and Under Camera Surveillance
Browse Our Archives
What Are Your Thoughts?leave a comment