After his own defense attorney said that the Rev. Thomas Faucher (who we previously wrote about here and here) had inhabited a “world of Satanism and pornography,” a judge sentenced the Boise, Idaho priest to 25 years in prison yesterday, without the possibility of parole.

“I am deeply sorry that I was and have been connected to that in any way,” Faucher told the judge.

Another duplicitous, telling phrase: Faucher, taking no responsibility for his actions, is merely saying he regrets he’s been linked to a netherworld of child-porn-trading criminals. He’s sorry alright: sorry he got caught.

Despite describing himself as a “sick puppy,” the man of God didn’t even think he needed any jail time — at all.

That’s debatable, to say the least. According to a detective’s testimony in court, Faucher was

… actively seeking interests with gay men, satanic interests and the rape and killing of minors. [The detective] also described the contents of the images police found on Faucher’s cellphone, computer and Dropbox account: more than 2,500 files that were sexually exploitative or pornographic with young-looking subjects. The files were described by police as violent, disturbing and torturous, some involving children crying.

In online chats…,  Faucher expressed a desire to have sex with boys. … Faucher said he had “satanic desires,” an attraction to 6-year-old boys, and that “the thought of killing someone does begin to excite me,” according to the detective, [who] also said Faucher’s online conversations about shared child pornography included … the sexual abuse of altar boys and babies, and saying that he liked a video of a boy being being beaten to death. … As Faucher solicited more videos of young boys, he wrote that he felt “wonderful indifference.”

Which, amazingly, is just how I feel… about Faucher’s upcoming 25-year prison stint.

Other images the detective said the investigation found included depictions of black slavery, which Faucher spoke about using racist language, as well as images of Faucher urinating on a cross and canon law book. Faucher also wrote that he urinated in the wine for Mass at least once.

Fittingly for a clergyman, Faucher at one point relayed the following to an online pal:

“It felt good to lie for no good reason except to do it … Most of the time, I just make a new reality and believe it as long as it suits me.”

It comes as no surprise, then, that Faucher thinks his “legacy” is ultimately going to be A-OK. He told the Idaho Statesman newspaper in a pre-sentencing video interview,

I don’t think that this is the end of my legacy. I think when I get out, I’ll have at least one or two more chapters after that. And I think in the long run, my reputation and my legacy will be restored, simply because what I’m being accused of is not me.

Father Faucher will be 98 before he’s a free man again, so good luck with all that. 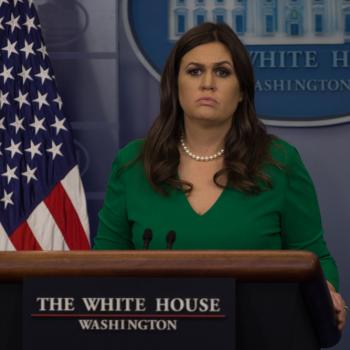