Parents “only have God to thank” for the “miraculous cure” of their 11-year-old daughter’s rare brain tumor, which mysteriously disappeared with the help of only prayer… and radiation and western medicine in general.

Doctors have “no explanation” for why Roxli Doss is able to go horseback riding after recently suffering from a debilitating cancer, which is all the explanation some people need to attribute her recovery to God.

“She is just as active as she ever was,” said Scott Doss, Roxli’s father.

It’s hard to imagine not too long ago doctors diagnosed the little girl with an inoperable brain tumor in June called diffuse intrinsic pontine glioma, or DIPG.

Dr. Harrod said the now 11-year-old went through weeks of radiation, even though there is no cure. The family held a benefit for her in August, and the Buda community responded in a big way. At that point, all Gena and Scott Doss could do was pray for a miracle.

“Praise God we did,” said Scott.

Even if doctors can’t pinpoint what exactly led to the recovery, there are possibilities that don’t involve the supernatural. It’s too bad those discussions were set aside so we could hear more religious praise from the family.

“When I first saw Roxli’s MRI scan, it was actually unbelievable,” said Dr. Harrod. “The tumor is undetectable on the MRI scan, which is really unusual.”

“At Dell Children’s, Texas Children’s, at Dana-Farber, at John Hopkins, and MD Anderson, all agreed it was DIPG,” said Scott.

From no cure to no trace, the family said now they only have God to thank.

The family has every right to believe this was a miracle from above, but that leaves even more questions than answers. Why was she cured but not others with the tumor? If this was a miracle, why even bother seeing doctors at all? Even if doctors can’t explain her recovery definitively, do they have any credible theories? It’s also possible the tumor was misdiagnosed or the doctors just didn’t have a complete understanding of it like they thought they did. Whatever the explanation, jumping to God Did It requires skipping over a lot of reasonable options.

Still, I’m glad she’s better. Maybe doctors can study her recovery and figure out if the same outcome can occur with other patients going through something similar. It’s not like God’s going to magically “cure” everyone. 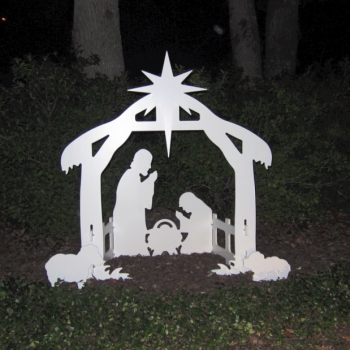 December 19, 2018
After Rejecting a Nativity Scene in 2016, WA City Foolishly Says Yes This Time
Next Post

December 19, 2018 Even While Apologizing, “Purity Culture” Advocate Joshua Harris is Screwing Up
Browse Our Archives
What Are Your Thoughts?leave a comment