A transgender student at Liberty High School in West Virginia says he was “cornered, harassed and intimidated” in a bathroom by Assistant Principal Lee Livengood. As the story goes, the sophomore went to use the boys’ restroom before a band trip. When he walked out, Livengood was standing there and confronted him about why he was using that particular restroom before challenging him to “use a urinal to prove that he was a boy.”

When a chaperone for the trip arrived on the scene, Livengood allegedly told the student, “I’m not going to lie, you kind of freak me out.”

The ACLU of West Virginia has written a letter to the district demanding a meeting with Superintendent Mark Manchin, and he at least seems to be receptive:

… I received a letter from the ACLU, with certain demands and certain requirements, I am reading that information. Everything is on the table with how we are going to deal with this but, I hope anyone listening here today… recognizes we take this thing incredibly seriously, and we are very concerned. Preliminary, of what I’ve read and what I’ve seen in my investigation, is that perhaps this assistant principal did act in an inappropriate way. I will make that decision and determination of how we are going to address it. We want to make sure that this child is protected,” said Superintendent Mark Manchin.

I don’t mind the reluctant response right now, but this district needs to be transparent about how it’s investigating the matter and how it deals with the situation if the ACLU’s allegations prove to be accurate.

What is problematic is how Livengood has remained on the job weeks after the allegations were first known (though the ACLU’s letter arrived more recently). The allegations alone should have prompted a paid leave of absence while the investigation takes place. Keeping him at the school poses a threat to trans students. 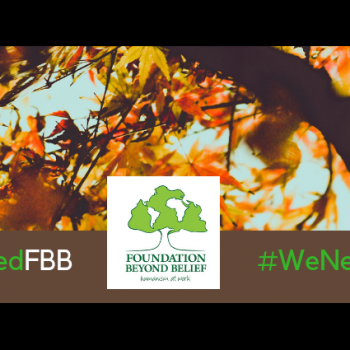 December 17, 2018
With Your Help, Foundation Beyond Belief Could Expand Its Humanist Philanthropy
Next Post

December 18, 2018 Judge Says Satanists Can Get Involved in Arkansas Ten Commandments Legal Battle
Browse Our Archives
What Are Your Thoughts?leave a comment