This Video About Raising a Religious Child as an Atheist Ignores the Real Issues December 18, 2018 Hemant Mehta

It’s always a bit jarring to see videos about religion (and atheism specifically) by people who don’t normally make those kinds of videos, because they say cringe-worthy things even though they mean perfectly well.

Evan Kaufman of parenting website Fatherly just had a baby and he posted this video about how he’s navigating religion with the child. It’s not easy because he’s culturally Jewish (but hovers between calling himself agnostic or atheist… depending on how he feels after seeing a “particularly beautiful sunset,” because that somehow makes a difference) while his wife is Catholic. Big dilemma! What do they do?!

Simple: They just baptize the child in the Catholic Church.

That’s it. No nuance. No discussion about the religious differences. Kaufman says he admires his wife’s faith for reasons that he never quite explains. He defends her by saying she’s a Catholic who doesn’t buy into all the horrible things the Catholic Church teaches. He never gets into what baptizing the child means in relation to his family’s Jewish beliefs.

Can you see why this is unintentionally infuriating?

Kaufman doesn’t help matters by opening the video by writing off the silly religions like Mormonism and Scientology before treating (religious) Judaism and Catholicism as if those are somehow above it all.

As for solutions, he says he’ll teach his son to just appreciate the “good parts of religion” and teach his child to “wonder.” Why they need to adopt a faith to do either of those things is anyone’s guess… Kaufman also says he’ll let his child find his own religious path forward, which is great, though it contradicts the whole idea of getting him baptized. If he said he was just doing it to appease his wife’s family, fine, but he doesn’t.

Ultimately, everything just seems to magically works out because neither he nor his wife really give a damn about their religious label; they just really feel that faith is important. For some reason. Which they never get into. The video is just a long advertisement for a generic product that has a marketing budget but no tangible benefits.

See, parents? You, too, can resolve your religious differences. All you have to do is ignore the things about religion that make religion religion. 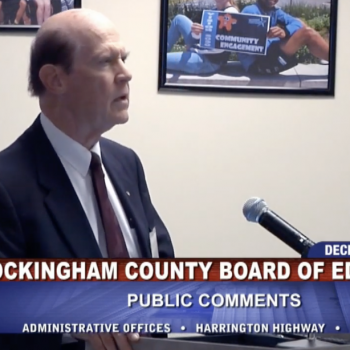 December 18, 2018 Ex-School Board Member Cites Anti-Atheist Law to Justify Christian Invocations
Browse Our Archives
What Are Your Thoughts?leave a comment