The comforting of bereaved, suffering parishioners is supposed to be among Catholic priests’ most important tasks. One Michigan padre didn’t get that memo.

[Jeff Hullibarger and his wife Linda Hullibarger] lost a teenage son to suicide, then sought compassion from their priest. Yet, at the packed funeral on Dec. 8, the Rev. Don LaCuesta delivered words so hurtful that Catholic officials in Detroit apologized in a statement emailed to the Detroit Free Press. …

“Everybody seems to understand but the Catholic Church,” said Jeff Hullibarger, father of 18-year-old Maison, a straight-A student and outstanding athlete who ended his own life on Dec. 4. The priest told mourners at the funeral that the youth might be blocked from heaven because of how he died, the couple said.

According to the Washington Post, LaCuesta focused on how the teen died, not on how well he’d lived.

[T]he Hullibargers listened from the pews as the priest spoke the word “suicide” six times. He told mourners … that Maison may be denied admittance to heaven because of the way he died. LaCuesta wondered aloud, the Hullibargers said, if Maison had repented enough in the eyes of God.

“He basically called our son a sinner,” [said] Linda. … “We looked at each other and said, What is he doing?” Jeffrey said in an interview with the newspaper. “We didn’t ask for this.” Eventually, Jeffrey decided to intervene and walked to the pulpit. “Father,” he whispered, “Please stop.”

But LaCuesta kept going, the Hullibargers recounted in local news reports. … “People told me there was almost a smirk on his face,” Jeff Hullibarger said. … “There were actually a couple of younger boys who were Maison’s age who left the church sobbing.” …

When the service finally ended, [the parents] told the priest he was no longer welcome at Maison’s gravesite burial — where the teen’s family and friends decided to say everything LaCuesta hadn’t.

In a statement released on Saturday, the Archdiocese of Detroit promised that the priest would be excused from funeral-service duties in the foreseeable future, and that the diocese will provide help for LaCuesta to become more effective and compassionate.

The news of what happened also put a spotlight on the tensions between traditionalist stances in the Roman Catholic Church about suicides and more nuanced thinking that has evolved over time about the issue, experts said.

The Rev. James Martin, a Jesuit priest and editor-at-large at America magazine, which covers news relevant to Catholics, said the homily for Maison was a “pastoral disaster.”

“The purpose of the homily in the funeral rite is to speak about not only the person’s life but the resurrection and the promise of new life of that person,” he said. “It’s to offer consolation and hope to the family of the deceased.”

[However,] according to the Catechism of the Catholic Church, a doctrinal text approved by Pope John Paul II in 1992, suicide is an affront to God’s love.

As is so often the case, the religious want to have their cake and eat it too. Among Catholics, it has been established doctrine for centuries that suicide is an unpardonable sin. As understanding of depression and other types of mental illness has grown, and the old fire-and-brimstone approach did nothing to keep suicide numbers down, the Church’s attitude has softened — whether due to genuine insight and compassion, or due to the need to not chase paying customers parishioners away, I have no idea.

Still, this is what the Catechism of the Catholic Church has to say about suicide:

Everyone is responsible for his life before God who has given it to him. It is God who remains the sovereign Master of life. We are obliged to accept life gratefully and preserve it for his honor and the salvation of our souls. We are stewards, not owners, of the life God has entrusted to us. It is not ours to dispose of.

Suicide contradicts the natural inclination of the human being to preserve and perpetuate his life. It is gravely contrary to the just love of self. It likewise offends love of neighbor because it unjustly breaks the ties of solidarity with family, nation, and other human societies to which we continue to have obligations. Suicide is contrary to love for the living God.

If suicide is committed with the intention of setting an example, especially to the young, it also takes on the gravity of scandal. Voluntary co-operation in suicide is contrary to the moral law.

Then, almost as an afterthought:

Grave psychological disturbances, anguish, or grave fear of hardship, suffering, or torture can diminish the responsibility of the one committing suicide.

So is taking one’s life an unforgivable sin in Catholicism, or not? The Church, none too subtly, tries to stake a claim to both sides. I almost sympathize with Father LaCuesta for not having navigated these choppy waters successfully — but not as much as I sympathize with the Hullibargers, who carry the unfathomable burden of a child’s death, only to have his memory besmirched by the man of God whose job it was to bring them comfort. 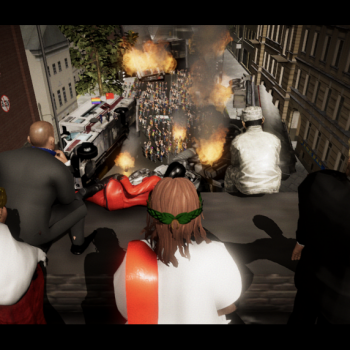 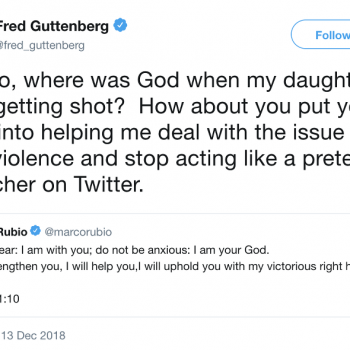 December 17, 2018 Father of Parkland Shooting Victim Slams Marco Rubio Over God and Gun Violence
Browse Our Archives
What Are Your Thoughts?leave a comment