This shouldn’t be controversial: A group of students at Volunteer High School in Tennessee wanted to start a chapter of the Gay-Straight Alliance and completed all the necessary steps to do it. Their principal approved the paperwork, and the group was official… except for one problem: The Hawkins County Board of Education has two conflicting policies about who gets final say over new student groups. One policy grants that authority to the principal; the other grants it to the school board.

That led to a “fiery” discussion between six of the board members last Thursday.

Many of them didn’t like the club, but they knew they couldn’t legally say no to it. Even the board’s attorney said the district would lose a lawsuit if they said no to the GSA’s formation. It’s not exactly enthusiastic approval, but a reluctant acceptance of how the law works. The board ultimately approved the group 5-1.

But that one vote came from a guy who has no business serving in elected office because he insisted that his interpretation of the Bible mattered far more than the Constitution, state laws, or what students wanted.

Tecky Hicks, who works as a Baptist pastor, said that if the GSA group was formed, he would urge parents to pull their kids out of school.

Hicks told board members he took the same oath as [Vice Chairman Debbie] Shedden, but he believes the Bible supersedes the Constitution of the U.S., the Bill of Rights, the Magna Carta, the Mayflower Compact, school board policy, the state constitution “and everything else.”

“Therefore, based on that, there’s no way under God’s heaven I can approve any such club in our schools,” Hicks told the board. “I’ve got a daughter who has a child in second grade this year, and she has already made the decision that if something like this is approved by our board, she’s pulling her kid out of school. I would suggest, and I’ll make it a public statement, that every person in the county who has that privilege — do it.

“I’ll take my stand on what I believe above and beyond anything man has ever made because the Bible plainly teaches that we are to subject ourselves to the authority that’s over us as long as the authority doesn’t overstep the bounds of what God has said it ought to be. God settled that over 2,000 years ago, folks, and I’m going to stand on it until hell freezes over.”

He took an oath… and then promptly refused to follow it because being a religious bigot matters more than doing what’s best for students. That’s his philosophy. While the district might be better off without families that think like him, it’s a sad statement that the existence of a club for students he thinks are Hell-bound is enough to make a push for homeschooling. (Would he say the same thing about a club for atheists? Jews? Hindus?)

The good news, if any, here is that Hicks was outnumbered. He was the only voice of unreason.

On the flip side, you had people like board member Chris Christian who understood the importance of a club like this:

Christian added, “That’s why I serve on this board. For the betterment of the children. I’m not questioning what these kids are going to do, but if there’s an ounce of hope of saving someone, a child, I would have to vote yes.”

Hannah Yarosh, a senior at the school and one of the co-founders of the GSA group, reiterated that the goal of the group was to create a culture of tolerance and acceptance for LGBTQ students at school while also giving students the ability to talk about LGBTQ matters in a safe space. More power to her.

If voters ever have a chance to replace Hicks with Yarosh, they should take it. At least she cares about the well-being of students instead of pleasing a God who delights in punishing those who are LGBTQ and not ashamed of it. 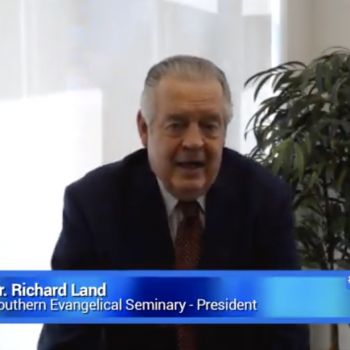