Baptist Leader: Donald Trump Has Proven His Moral Worth in His Third Marriage December 17, 2018 Hemant Mehta

Baptist Leader: Donald Trump Has Proven His Moral Worth in His Third Marriage

Speaking on TheDove TV’s “Focus Today” program recently, Southern Evangelical Seminary President Richard Land explained that Trump was a “genetic marvel” because he’s working with virtually no sleep. We apparently disagree on the definition of “working.”

He also claimed Trump was “more moral” than Hillary Clinton. So we also disagree on the definition of “moral.”

But it was a different comment that showed just how hypocritical white evangelicals are when it comes to this president.

At this rate, by his fifth marriage, they’ll think he’s sinless.

By the way, I don’t recall Land ever giving this much praise to Barack Obama, a Christian who’s been married to the same woman for more than 25 years and was untouched by scandals about his marriage during his presidency. I wonder why. Obama could’ve looked at another woman a certain way, and people like Land would’ve accused him of adultery. It just shows you how white evangelicals have different standards of morality depending on a person’s political affiliation.

Land, a former president of the Southern Baptist Convention’s Ethics & Religious Liberty Commission, “retired” from that position in 2013 after making racist remarks about Trayvon Martin and getting caught plagiarizing his columns.

So he’s really an expert on all things morality. 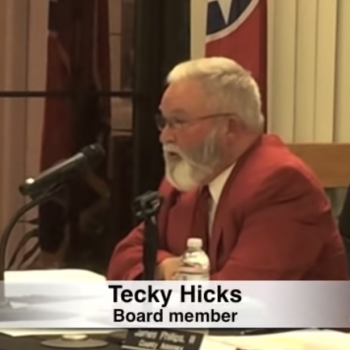 December 17, 2018 Reading, PA Mayor Says Praying and Getting into Heaven is the Solution to Murder
Browse Our Archives
What Are Your Thoughts?leave a comment