A Louisiana library backed down from its educational “Drag Queen Story Time” event after a lawsuit brought by Christian groups, but some advocates aren’t ready to give up the fight.

We reported on this issue in September, when two military-themed Christian organizations — Warriors for Christ and Special Forces of Liberty — filed the lawsuit against the Lafayette Parish Library.

Now, the library has backed down from the controversial reading program, but members of the University of Louisiana at Lafayette’s Delta Lambda Phi chapter are fighting back.

Even before the library announced its decision, Delta Lambda Phi President Brad Parfait says they had planned to rent a private space at the library to have drag queen story time without the library’s official backing.

Whenever the library caught wind, they shut it down

“They said it was going to damage the case.” said Parfait.

According to Parfait, the Lafayette Library Executive Director Teresa Elberson told him that [they’re] not allowed to have Drag Queen Story Time until the lawsuit against it is settled in court.

“I was kinda disappointed that they would go as far as to infringe upon civil rights of private citizens.” said Parfait.

“Kinda disappointed” is an understatement for me. The library is in the right here, but they have closed the program, which helps young kids by discouraging bullying, over what’s really a frivolous lawsuit. To make matters worse, the library’s surrender hasn’t stopped the litigation from proceeding.

Warriors for Christ and Special Forces of Liberty, the groups that filed the lawsuit, plan to move forward despite the library backing down.

“LGBT Secular Humanism is a religion for the purposes of the 1st amendment establishment clause. The question is can the government endorse that.” said Chris Sevier, Attorney for Warriors for Christ and Special Forces of Liberty.

Parfait says he still wants to host the event at the library but if that’s not possible, he’s willing to have in another part of the city.

“I mean the original intention of this event was to keep tolerance and friendship fostering among children even though some say we are grooming them or we are indoctrinating them to a certain philosophy, we just seek to make them open and make sure no bullying happens.” he explained.

This lawsuit shouldn’t succeed, and the library is obviously just trying to lie low until it’s over, but as soon as possible, the story times should continue. It’s a wonderful program stressing wonderful values. It shouldn’t matter what the readers look like when they’re promoting peace and equality (and not a particular religious point of view).

December 15, 2018
Anne Graham Lotz: My Breast Cancer's a Sign That an Attack on Israel is Imminent
Next Post 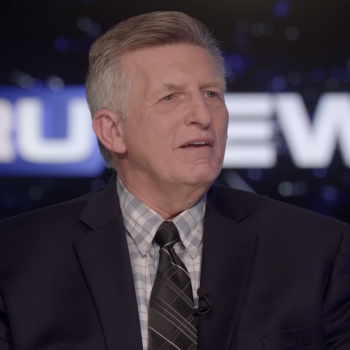 December 15, 2018 Christian Conspiracist: The World Is Run By "Child-Molesting Satanists"
Browse Our Archives
What Are Your Thoughts?leave a comment