Christian Conspiracist: The World Is Run By “Child-Molesting Satanists”

Christian broadcaster Rick Wiles, who previously claimed Dr. Christine Blasey Ford was a “CIA mind-control” assassin, said on his TruNews program Thursday that the government was run by evil Satanists.

… this world is run by Satanists; devil-worshiping, Luciferian, child-molesting Satanists.

And [people] go, “That’s crazy.” No, it’s not! That’s after 20 years of investigating and analyzing what’s going on in the world, and I’ve come to the conclusion the world is run by Satanists. I don’t know what other conclusion you can come to! If you’re a pedophile, you get advanced in Washington. You can commit all kinds of crimes; you can be a rapist; you can do anything and your career soars!

Not surprisingly, his “correspondents” didn’t push back against his bizarre rant.

20 years of investigations don’t mean anything if your standards for evidence allow conspiracy theories to seep in. But what else would you expect from the mind of a nut who blamed last year’s mass shooting in Las Vegas on a “gay/lesbian Nazi regime“? 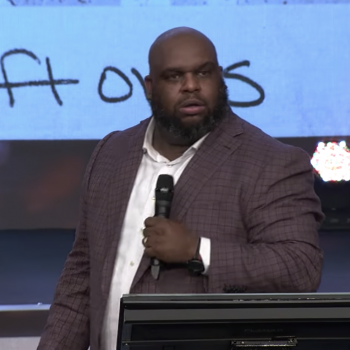 December 15, 2018 Podcast Ep. 248: The "Generous" Pastor and His Expensive Car
Browse Our Archives
What Are Your Thoughts?leave a comment