Anne Graham Lotz: My Breast Cancer’s a Sign That an Attack on Israel is Imminent December 15, 2018 Beth Stoneburner

Anne Graham Lotz: My Breast Cancer’s a Sign That an Attack on Israel is Imminent

That’s a condition I’d never wish on anyone, no matter how despicable their worldview. But I have to admit, my sympathy waned a little bit when she made the claim that her illness means Israel is in danger of a fatal attack:

Lotz reasoned on her website Wednesday that she has long thought of herself and the modern state of Israel as “entwined,” given that both are 70 years old, with the latter having been established in 1948.

If that’s her logic, she’s going to be shocked when she learns how many other people are also born in 1948. Israel is entwined with a lot of people, apparently…

The evangelist and author said she’s questioning whether “there is more to my cancer at the age of 70 than just a random coincidence.”

“In the Bible, God often had His spokespersons live out the message He gave them …before they delivered the message to the people,” she said.

Look, I get it. Cancer is scary, and many people struggle to find some rhyme or reason for it to provide them with hope. No one wants to hear that their genetics or perhaps their lifestyle choices are what caused the diagnosis.

“Could it be that God has given me a message for her that I am living out in my own experience?” she wondered.

Maybe. If it happens, her cancer won’t have anything to do with it. (Obviously.)

Lotz is famous for making all kinds of bizarre prophetic predictions, including that the solar eclipse was a sign of God’s anger at us. So far, none of them have come to fruition.

I hope her treatment is successful. Maybe after that, she can find time to read a science book. 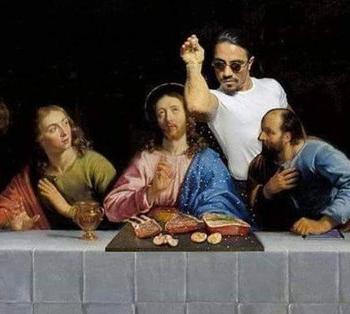