Earlier this month, right next to a Nativity scene in the Illinois State Capitol rotunda, a group of Satanists erected a beautiful “Snaketivity” statue saying “Knowledge is the Greatest Gift.” It features a woman’s hand, surrounded by a snake, holding an apple.

Let me reiterate: The Satanic Temple’s Chicago Chapter went through all the formal paperwork to get this up. They paid for the statue. They put it up. They followed the rules.

If anyone doesn’t like it, Illinois legislators are free to change the rules so the Capitol doesn’t allow any third party displays to go up, but until that happens, it’s a free-for-all.

That didn’t stop State Senator Paul Schimpf from writing an angry letter to the Secretary of State condemning his damn adherence to the rules.

That statue isn’t a slap in the face to people of faith. It celebrates knowledge. If you see that as antagonistic to religion, maybe you should rethink your religion.

But at least Schimpf is just one whiny legislator. He can write his angry letter and everyone else is free to mock him for his ignorance of the law.

Now, however, he has some more serious company.

WHEREAS, The members of the Illinois House of Representatives condemn in the strongest possible terms the decision of the Illinois Secretary of State to allow the Snaketivity display to remain in the Capitol rotunda during the Christmas and Hannukkah seasons; and

WHEREAS, We respect and understand the rights of free speech and equal access that are guaranteed under the Constitution of the United States, however, the fact that the Snaketivity display is considered to be a religious display on par with the nativity scene and menorah is directly contradicted by the Satanic Temple’s description of itself as a non-theistic organization; and

WHEREAS, The Satanic display is nothing more than a publicity stunt meant to cause outrage and division; therefore, be it

RESOLVED, BY THE HOUSE OF REPRESENTATIVES OF THE ONE HUNDREDTH GENERAL ASSEMBLY OF THE STATE OF ILLINOIS, that we condemn in the strongest possible terms the decision by the Secretary of State to allow the Satanic display to remain in the Capitol rotunda, and we urge the Secretary of State to reject the Satanic display in the future; and be it further

RESOLVED, That a suitable copy of this resolution be delivered to Secretary of State Jesse White.

God, these people are ignorant…

Look: No one cares if they don’t like the display. I don’t like the Nativity, but I’m not calling for it to be taken down. That’s because I’m an adult.

You can’t say you’re for free speech and equal access, but only when a display pleases you. The Satanists followed the rules. That’s why their display is up.

(The irony is that the Freedom From Religion Foundation put up their own display in the Illinois Rotunda that says “There are no gods.” It’s not as flashy or artistic as the Satanic statue, but it’s much more in your face. Yet the Republicans didn’t even mention that one.)

“Publicity stunt” is in the eye of the beholder. Groups that erect the Nativity scene on public property are doing the exact same thing — and we know it’s a stunt because they choose not to put up the same displays in front of their churches. They want to link their religion with the government for everyone to see. In any case, the law doesn’t forbid publicity stunts. The law prohibits government from allowing one group’s display while forbidding another’s.

The statue isn’t coming down no matter how many people agree to this resolution. But the Republicans are making clear that the rotunda is only reserved for people who share their faith or who don’t offend their personal sensibilities. Those are exactly the kind of people who have no business running the government.

My colleague Jack Matirko got a statement from The Satanic Temple’s legal counsel Stu De Haan, who called this resolution a disgrace:

“This is just another attempt by a would-be theocrat to undermine one of the very fundamental rights this country was founded on,” said De Haan. “It is shameful that there is an increasing number of politicians who boast their support for the denial of freedoms to minority views while denigrating all religions to mere regional popularity contests. To call The Satanic Temple’s holiday display divisive while making efforts to violate the Free Exercise and the Establishment Clause of the US constitution is as dishonest as it is illegal.”

I would love to see a cheeky Democrat propose a resolution condemning the Republicans’ faux-condemnation. Because the GOP’s arrogance is far more offensive that a display praising knowledge. 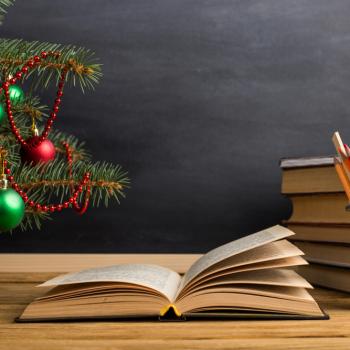 December 13, 2018
Atheists Win Discrimination Case Against BC School That Kicked Out Their Child
Next Post