Andrew Sullivan Claims It’s Impossible Not to Have Religion “If You Are a Human” December 13, 2018 Terry Firma

Essayist Andrew Sullivan, who typically writes from the center, has penned dozens, perhaps hundreds of articles that I respect and often agree with, in publications like Time, the Atlantic, the Daily Beast, and New York magazine. I find him to be clear-eyed and thoughtful. But not unfailingly so.

Sullivan’s blind spots have included, or include today, being an enthusiastic Catholic despite also being openly gay (you figure that one out); his naive cheerleading for the U.S. invasion of Iraq 15 years ago (a stance he has since repudiated); and the easy virtue he displayed in switching his heartfelt political allegiance from George W. Bush to Barack Obama, culminating in literally blubbering with gratitude when the latter magnanimously declared himself in favor of marriage equality only in 2012 — ages after more principled people had already arrived there.

In the latest issue of New York magazine, Sullivan returns to the topic of religion. And right off the bat, he claims something that strikes me as unserious, cheap, and disappointing.

Everyone has a religion. It is, in fact, impossible not to have a religion if you are a human being. 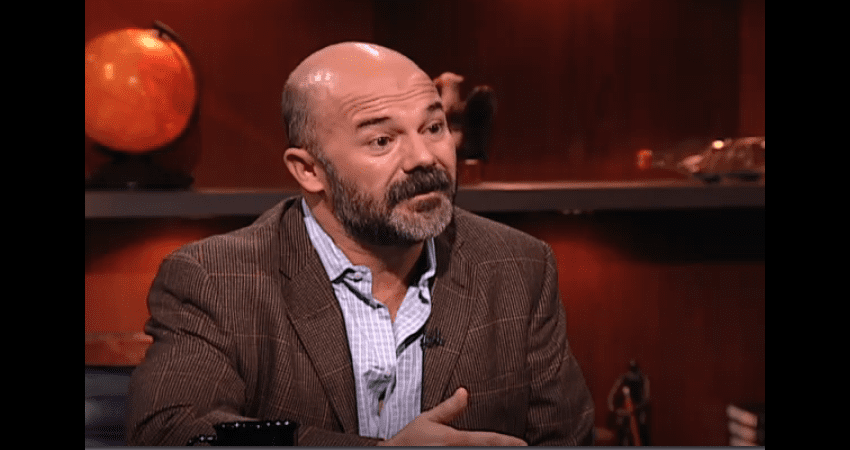 It’s in our genes and has expressed itself in every culture, in every age, including our own secularized husk of a society. By religion, I mean something quite specific: a practice not a theory; a way of life that gives meaning, a meaning that cannot really be defended without recourse to some transcendent value, undying “Truth” or God (or gods).

He’d been there before. Last year, Sullivan told an interviewer

“I’d never not believed in God, never; it’s not like I chose to believe, it’s just that I couldn’t not believe … I couldn’t look at the world and universe and say, ‘This has no meaning,’ ” Sullivan said. But there, for the first time, he “believed what (he) thought was the most viable alternative: that God is evil … not that God does not exist, but that the force behind the universe is here to hurt, to kill, to force suffering.”

And then, after a few minutes of this deep existential dread, he heard an intonation, sad and impatient and sympathetic and loving, saying his name: “Andrew, Andrew.”

That’s all it took. Upon hearing a voice in his head (an experience that, in a non-religious context, might be medically concerning), Sullivan was all-in for the Lord again. And that’s fine. To each his own.

I do somewhat question the sincerity of his professions of love and kindness toward all, considering his repeated putdowns of non-believers. It is literally dehumanizing for Sullivan to assert that those who get by fine without gods aren’t really human. He cops out of completely owning that statement by redefining religion; suddenly religion is anything that gives life deeper meaning. That means that, according to Sullivan, atheists can be human after all (thank god!) as long as they consciously give meaning to their existence.

I’m not buying his odd rebranding of the word religion. While god believers surely derive meaning from their faith, religion and meaning are not synonymous. And although millions of atheists live lives that they justifiably consider meaningful (thus meeting Sullivan’s standard for considering them both human and, ahem, religious), I’m not vain enough to think my life is too. Honest. As a non-humanist atheist, I happen not to live according to some great and burning purpose, serving an overarching ideal.

Like every other living thing, I was literally nothing before I was born, and I will be nothing again soon enough. For as long as I’m here, my job is to raise three fantastic young daughters to become informed, critical, ethical, self-sufficient adults. I try, usually with only moderate success, not to be a dick. Like Sullivan, I scribble, sometimes passionately. I also take pretty photos to provide for my family.

That’s about it. Does that add up to an existence full of cosmic meaning? Doubtful. I’m certainly not clamoring for Sullivan’s approval in any case, nor for his god’s. And if that makes me less than human, ah… I’m sorry Sully and his Celestial Sidekick feel that way.

Even today’s atheists are expressing an attenuated form of religion. Their denial of any God is as absolute as others’ faith in God, and entails just as much a set of values to live by — including, for some, daily rituals like meditation, a form of prayer.

In his highly entertaining book, The Seven Types of Atheism, released in October in the U.S., philosopher John Gray puts it this way: “Religion is an attempt to find meaning in events, not a theory that tries to explain the universe.” It exists because we humans are the only species, so far as we can know, who have evolved to know explicitly that, one day in the future, we will die. And this existential fact requires some way of reconciling us to it while we are alive.

Does it? My way of dealing with my inevitable death is to face it as a fact of life. I’m not looking forward to the end, but I don’t know why the prospect of non-existence should frighten me (other than the suffering that may precede it, about which I can presently only shrug — apart from resolving to hoard pills that should allow me to die on my own terms).

That death is real doesn’t mean God is, or that we should go on a spiritual quest to allay our primitive fears. 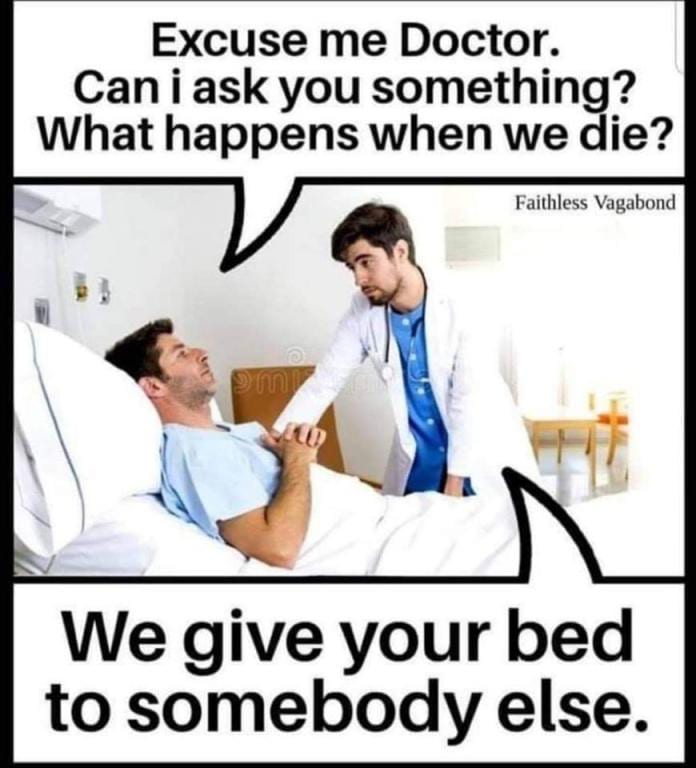 Sullivan thinks that natural beauty and the mysteries of the universe are proof of a Supreme Being’s presence. He has walked through a flower garden that “briefly seemed eternal” (re-read those last three words and try not to smile); he’s heard a rustling in the trees that slipped him “out of time” into a form of transcendence.

That moment, that intersection of timelessness and time, is what I always associated with … the presence of God.

As is Christians’ custom, Sullivan praises God for providing flowers and butterflies and nightingales (the better to slip into transcendence), while neglecting to take the Almighty to task about the existence of intestinal parasites, deadly viruses, and pediatric cancers.

(He also doesn’t explain why he specifically believes in the Catholic God, rather than in Allah, Brahma, or Quetzalcoatl. Like billions of other religionists, he was born into a culture and a family that happens to have picked the correct deity. Isn’t that lucky?)

Once again: Sullivan is welcome to his beliefs. I won’t belittle them if he refrains from belittling mine.

By the way, despite being a life-long heathen, I know the awe and momentary transcendence he speaks of. I’ve been transfixed at the Grand Canyon; at Africa’s Cape of Good Hope; on the French, Italian, Spanish, and Portuguese coasts; in the heart of China; on the shores of New Zealand; in the jungles of Kalimantan. I’ve climbed mountains in Norway, volcanoes on Sumatra, and snorkeled over Caribbean reefs that exploded with varicolored fish. My house happens to be in the middle of Maine’s Acadia National Park, overlooking the Atlantic Ocean. A pair of eagles often dive-bombs for fish in the fjord whose shoreline is 25 yards from my front door. Our night skies, unpolluted by city lights, can make you weep for all their vastness, clarity, and beauty.

And yet, I’ve never felt religious stirrings; and I’ve never known a single atheist who has taken in the sights that I have (or similar ones) and became an ardent believer in a divine Creator.

To Sullivan, we’re deficient that way.

Seduced by scientism, distracted by materialism, insulated, like no humans before us, from the vicissitudes of sickness and the ubiquity of early death, the post-Christian West believes instead in something we have called progress — a gradual ascent of mankind toward reason, peace, and prosperity — as a substitute in many ways for our previous monotheism. We have constructed a capitalist system that turns individual selfishness into a collective asset and showers us with earthly goods; we have leveraged science for our own health and comfort. Our ability to extend this material bonanza to more and more people is how we define progress; and progress is what we call meaning. In this respect, Steven Pinker is one of the most religious writers I’ve ever admired. His faith in reason is as complete as any fundamentalist’s belief in God.

So belief in progress = meaning = religion. Fundamentalist religion, no less. If you’re an atheist who is stoked to see reason, peace, and prosperity advance worldwide, sorry — what you’re seeing is just a “secularized husk of a society,” and there’s no appreciable difference between you and a religious fundie.

This crab mentality on display in Sullivan’s meager article is depressing, coming as it does from an otherwise gifted thinker and writer.

If there is a God, shouldn’t He have divinely inspired our friend just a little more?

(Screenshot via Comedy Central. Portions of this article were published earlier)