The dumbest lawbreakers in society have to be the ones who broadcast their crimes to the world as if they’re invincible, and that seems to be what a Christian group known as GenerationNXT (Generation Next) did this past September when they posted this message on Facebook:

A big thank you to our Spotlight Church this week The Warehouse Church in Parkersburg, WV. Seven teachers and principals that attend TWC have stepped up to either start or join a NXT Club in their School!!!…

In addition, TWC is one of GenerationNXT’s biggest financial sponsors. GenerationNXT is 100% funded by donations. If you would like to support our ministry and vision of “bringing God back into our schools,” please private message us for further details.

While the vision is just silly rhetoric (since God was never pushed out of schools), that first bit is troubling since public school officials legally cannot start or lead religious groups. It’s fine to have an after school Christian club if it’s student led, but teachers and administrators shouldn’t be running the show.

That’s especially true at elementary schools, and those were the places targeted in this post.

According to the Freedom From Religion Foundation, representatives from The Warehouse Church and school officials have started Bible clubs at Kanawha Elementary and Blennerhassett Elementary in West Virginia, “recruiting students at lunch.”

Church representatives may try to assert that these elementary clubs are “student-led.” Yet, families within the school system report that isn’t correct. FFRF is also unaware of any case where a court has found that elementary school students have permissibly led a religious club during the school day. Additionally, it appears that Generation NXT clubs even within Wood County Schools middle schools are unconstitutional. Any school religious groups must be bona fide student clubs that are both student-initiated and student-run. Outside adults cannot regularly attend these meetings and teachers cannot participate in religious activities with students, unlike what’s happening in these middle schools.

Note that they’re not saying Christians clubs are banned. They’re only talking about religious clubs led by school officials. Also, the idea that adults from the church are recruiting kids during lunch isn’t just illegal; it’s downright creepy.

Now that this story has hit the local news, we’re getting comment from the District itself. Wood County Superintendent William Hosaflook admitted that the clubs “met” during lunch, however he added that that is no longer the case and that the clubs now meet after school.

Okay, but what about the school officials leading these groups?

Hosaflook says the teachers involved in the club served as facilitators father than direct participants, as required by state law.

That’s… good to hear. Even though it contradicts what the Christian group was announcing to its followers. While we’re at it, the church itself issued a statement distancing itself from GenerationNXT.

Kristin Shaffer, Executive Director for the Warehouse Church, issued a statement late Thursday afternoon on the challenge to the Bible clubs at Wood County Schools.

“While we — along with many other churches in the Mid Ohio Valley — financially support Generation NXT, Generation NXT is an organization independent of any one church. Therefore, we are unable to comment directly on how and when the organization holds club meetings in area schools. However, as people of faith, we believe in the power of praying for and with the next generation. We also desire young people to know Jesus and His Word, so we support clubs that bring students closer to one another and God, including Generation NXT, Young Life, Fellowship of Christian Athletes, and others.”

Sure, we give them money, but if they break the law, don’t blame us!

Quite a testimonial right there.

Maybe the question we should be asking is what these Christians would’ve tried to get away with if FFRF hadn’t been informed about this situation. 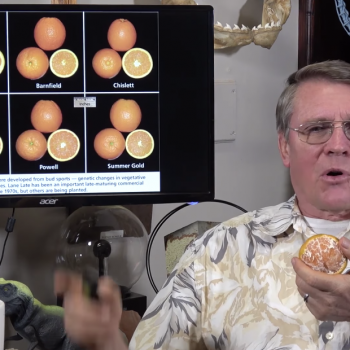 December 1, 2018 Creationist Kent Hovind Now Says Oranges Are Proof That Evolution is False
Browse Our Archives
What Are Your Thoughts?leave a comment