The other day, American Family Association radio host Bryan Fischer claimed that dinosaurs went extinct as a result of the Great Flood. Which happened, theoretically, only a few thousand years ago. His argument was that vegetation died out, leading to the death of herbivore dinosaurs, which subsequently led to the death of carnivorous dinosaurs.

I responded to that article, trying to point out the larger fallacies with his theory, and wouldn’t you know it, Fischer quoted the piece during yesterday’s episode at the 28:42 mark. (Spoiler: He wasn’t happy with it.)

Not surprisingly, he doubles down on his ignorance. That alone is worth worthing the video, because it’s always entertaining when people who are wrong try even harder to justify their wrongness.

For example, I mentioned that other herbivores still exist today… so clearly they survived the hypothetical flood, right? Checkmate?!

No, says Fischer. He didn’t say all herbivores died out. Just the big herbivores who needed to eat a lot of vegetation. The smaller ones had enough to eat!

But that doesn’t make sense by his own logic. Whenever you ask Creationists how Noah fit gigantic animals on the Ark, the response is that he brought baby animals to conserve space. He sure as hell didn’t bring full-size brontosauruses on board. So even in Fischer’s Christian fantasy world, the herbivore dinosaurs were small.

The sad part is he’ll probably try rationalizing his theory again on the next episode, and we’ll hear something that’s even more ludicrous. When people go down the rabbit hole that deep, we shouldn’t be surprised when they come out covered in shit. 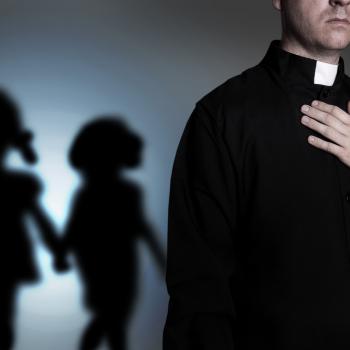 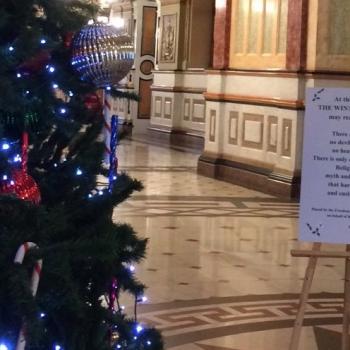 November 30, 2018 For the Tenth Year, "There Are No Gods" Sign Goes Up in IL Capitol Building
Browse Our Archives
What Are Your Thoughts?leave a comment