In 2002, when 31-year-old Jeffrey Windy was a pastor in Peoria, Illinois, he was arrested… for manufacturing and selling gamma-hydroxybutyrate, a.k.a. the “date-rape drug.” Windy claimed he was only using it as a bodybuilding supplement, like something you’d add to a protein shake, but that was always a far-fetched explanation. He spent four years in prison and had three more years of mandatory supervised release.

To the surprise of many, however, Windy found a new job in 2013… back in the Catholic Church. He was hired in a different parish around the same region, only to be removed from his position earlier this year after getting involved in another criminal complaint. 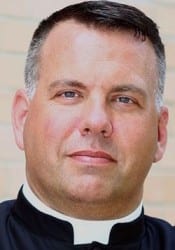 At a time when the public spotlight is again fixed on how the Catholic clergy deals with misconduct in its ranks, Windy’s case raises questions about how, when and with what oversight the church decides to return troubled priests to ministry, regardless of the nature of their transgressions.

“It’s amazing he was put back in,” said Terry McKiernan, president of BishopAccountability.org, a Boston-based advocacy group that has tracked the Catholic hierarchy’s record in dealing with priest misconduct. The fact that Windy has now been removed again “does seem to indicate that the diocese had not thought it through.”

To be fair, what Windy’s in trouble for this time isn’t comparable to his earlier irresponsible actions. Last year, a woman named Deanna Rowley attempted to steal a purse from an 82-year-old victim. Rowley eventually pleaded guilty to aggravated robbery and faced a prison sentence of up to 12 years. One way to obtain leniency was getting a statement in her defense… from the victim. But that, as you might imagine, makes for an awkward conversation.

So Rowley’s father enlisted Windy’s help as an intermediary. (Windy served as a priest at his church.)

Both men reached out to the victim, and everything appeared to go well, however Rowley’s father was later arrested on charges of “felony attempted harassment of a witness.” The trial is set to begin in January.

The reason Windy is in trouble is because he got involved in this criminal matter without consulting Church leaders. That “lack of pastoral prudence,” according to Monsignor James Kruse, is why he was dismissed from his position. Many in the congregation say it’s no big deal, though, and they want him reinstated.

Still, you would think someone with a criminal history, given a second chance, would take extra precautions when handling a sensitive issue, not insert himself into a potentially volatile situation in secret. For once, the Church acted quickly to punish a priest who wasn’t following the rules… and it’s coming back to bite them in the ass. Damn if you do…

The Church is right to remove him from the ministry while they conduct a thorough investigation into the matter. What he did this time around wasn’t wrong, per se, but any priest who decides to take serious matters into his own hands without even informing the Church of his actions is going rogue in all the wrong ways. If he can’t be trusted to follow the rules in this case, why should he be trusted in other ones?

For now, the Church’s website says Windy is on a “leave of absence.”

(Thanks to @MaxxxDoubt for the link) 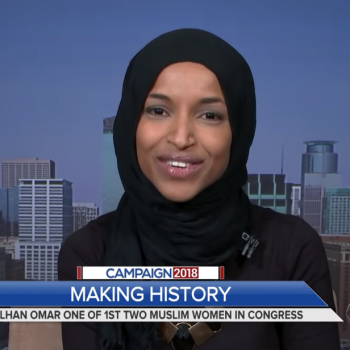 November 26, 2018
Hijabs and Yarmulkes Will Be Allowed in Congress, But What About Colanders?
Next Post

November 27, 2018 AR State Sen. Urges Elected Officials to Join His "Christian Lawmakers" Group
Browse Our Archives
What Are Your Thoughts?leave a comment