When last we wrote about John Allen Chau, the circumstances of his death hadn’t yet been fully revealed. It was assumed that Chau, a 26-year-old Christian from Alabama, wanted to spread the gospel among the natives of North Sentinel Island in the Bay of Bengal, east of India. The island is almost completely untouched by outsiders, in part because the Sentinelese, estimated to number between 50 and 100, have always been hostile to visitors. Adventurers who’ve tried to go near the tribe have been aggressively rebuffed by warriors carrying bows, arrows, and spears.

In recent days, excerpts from Chau’s last letter home have been released, and so we’ve learned more about what drove him. His extraordinary zeal and naiveté shine through in many paragraphs.

Via the New York Times:

A graduate of Oral Roberts University, [Chau] was fixated on spreading Christianity to North Sentinel, telling friends he had been working for years to make the right contacts. …

“You guys might think I’m crazy in all this,” he wrote in a last letter to his parents. “But I think it’s worth it to declare Jesus to these people.”

Part letter, part journal, in 13 pages with many cross-outs and messy scrawl, Mr. Chau laid out a disturbing account of his final days.

He details how, despite India’s policy of keeping strangers off of North Sentinel Island, he paid some fishermen to take him to his illicit destination under cover of darkness.

“The Milky Way was above and God Himself was shielding us from the Coast Guard and Navy patrols,” he wrote.

But the Almighty was, apparently, no match for the Sentinelese. Chau, bearing gifts including scissors, safety pins, a fishing line, and a soccer ball — what, no beads and little mirrors? — tried to approach the Sentinelese’s territory multiple times. He found the tribe just as hostile as he’d feared.

During one abandoned effort, Chau writes that he hollered

“My name is John, I love you and Jesus loves you.”

[A] man wearing a white crown possibly made of flowers [took] a “leadership stance” by standing atop the tallest coral rock on the beach. The man yelled, and Mr. Chau tried to respond, singing some worship songs and yelling back something in Xhosa, a language he apparently knew a few words of from when he coached soccer in South Africa a few years ago.

That’s an interesting linguistic advance. It makes no more sense to address the Sentinelese in English, of course, but Chau’s choice of Xhosa — a language spoken by black people five thousand miles away — seems to point to the neo-colonial notion that the vast cultural differences between darker-skinned people can be papered over with a little bit of “primitive” argot that the white (or Asian) visitor, in his magnanimity, has taken it upon himself to learn.

When Mr. Chau tried to hand over fish and a bundle of gifts, a boy shot an arrow “directly into my Bible which I was holding.”

“I grabbed the arrow shaft as it broke in my Bible and felt the arrow head,” he said. “It was metal, thin but very sharp.” Mr. Chau stumbled back and shouted at the boy.

When that didn’t cure Chau of his penchant for proselytizing, things inevitably took the turn that he’d reckoned with in the letter, when he pleaded with his loved ones to not be angry at the Sentinelese — “or at God” — “if I get killed.”

On the afternoon of Nov. 16, the fishermen told police officers, Mr. Chau reassured them that he would be fine staying on the island overnight and that the fishermen could go. They motored out, leaving Mr. Chau alone for the first time.

When they passed by the island the next morning, they saw the islanders dragging his body on the beach with a rope.

Look, trespassing is illegal and ill-advised in the United States, too. Keep traipsing onto property whose owners have repeatedly indicated they wish to be left alone, and chances are good you’ll end up in the hospital … or worse. The risk is obviously much greater when, on top of that, you go up against bands of seriously inbred tribespeople in a part of the world you’re entirely unfamiliar with.

Chau was right to request that no one blame the islanders.

Whether his bereaved family should be angry at God is up to them, but if the victim were my brother or son, I’d swing between grief and anger at him.

Chau had no business going where he went. He considered himself above the law. He made a nuisance of himself by bothering people who had done nothing to him, and who wished nothing more than to be left in peace. He wouldn’t take no for an answer.

Above all, by attempting to foist himself upon the tribespeople, he risked wiping out every one of them, as the hyper-isolated islanders likely have no resistance to viral illnesses like the measles and influenza.

Did Chau, in his research, not come across or consider this salient fact? Do they not teach basic biology at Oral Roberts? Or does the chance of accidental genocide pale next to the exciting prospect of bagging souls for Jesus?

Given all this, and despite the societal norm that we ought to speak well of the dead, I can’t bring myself to paint Chau in a positive light. Yes, he was brave. Yes, he was well-intentioned. But judging by his actions and his last words, he was also self-important, arrogant, deluded, foolish, and a pest. I’m sorry he was killed but delighted that the Sentinelese remain untouched and unharmed.

Even in death Chau isn’t quite done with putting other people in danger. According to CBS News, police in India

…are consulting anthropologists, tribal welfare experts and scholars to figure out a way to recover the body.

The Sentinelese are thought to have buried Chau’s remains on a beach. 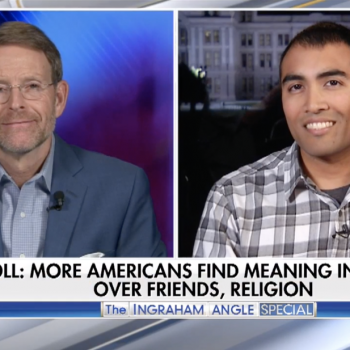 November 24, 2018
Here's My FOX News Segment About How We Find Meaning in Life Outside of Religion
Next Post 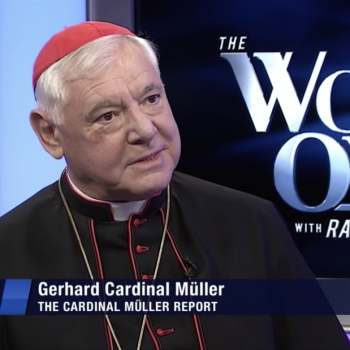 November 24, 2018 Catholic Cardinal Blames Sex Scandals on "Moral Depravity" of Gay People
Browse Our Archives
What Are Your Thoughts?leave a comment