In early 2016, members of the Kenai Peninsula Borough Assembly in Alaska were thinking about getting rid of invocations at meetings… but they kept them and said anyone who wanted to give one could do so.

Hearing that invitation, a member of The Satanic Temple signed up. She delivered an invocation that included the line, “That which will not bend must break and that which can be destroyed by truth should never be spared its demise. It is done. Hail Satan.”

That didn’t sit well with some of the Assembly members (for some reason), so they voted 6-3 in favor of changing the rules. They didn’t eliminate the invocations, but they put in place new rules limiting speakers to members of “Assembly-approved religious association.”

Saying that only members of “established” groups could give the invocations effectively shut out atheists, Satanists, and religious minorities that didn’t have money for a building or rental space. This was only a step away from saying only Christians could deliver the invocations, and it was still illegal.

In December of 2016, the ACLU of Alaska decided enough was enough. They filed a lawsuit against the Kenai Peninsula Borough.

The lawsuit claimed the Borough was violating the Constitution’s Equal Protection Clause and the Establishment Clause by “favoring some religious practices over other religious practices, and from favoring religion over non-religion.” It also said the policy violated the plaintiffs’ freedom of speech and freedom of association.

Last month, a Superior Court found that the borough’s policy was unconstitutional.

(Elise Boyer is a Jewish plaintiff who couldn’t deliver an invocation because there’s no synagogue in the community.)

While the court’s decision was the right now, the bad news was that no one on the council seemed to give a damn about it. In the two meetings after the decision came down, there was a religious invocation, in violation of both the law and the recent court order.

The borough’s resolution allows a chaplain serving the military, law enforcement agencies, fire departments, hospitals or other similar organizations to give invocations before Kenai Peninsula Borough Assembly meetings, as well as people who are members of a religious organization with an “established presence” in the borough that meets regularly.

Tuesday’s invocation was given by Borough Assembly President Wayne Ogle, who gave thanks to “Father God” and offered a number of prayers.

So they weren’t abiding by the law because… no reason. They just didn’t feel like it.

Surely they knew the ACLU would push back.

Maybe that’s why, Tuesday night, the Assembly made two important decisions. They said they would not appeal the decision, a move that will save taxpayers a lot of money since the elected officials would’ve lost the challenge. They also changed the rules (again) so that more people could deliver invocations in the future.

Next on the agenda was an amendment of the current invocation policy that would “broaden the scope of eligible invocation providers to better reflect the diversity of beliefs in the borough,” the resolution stated.

That amendment passed 7-2. If they actually stick by it, it should resolve the problem since anyone in the community can now request to deliver the invocation. All it took was months of legal wrangling for the Assembly members to finally do what they should’ve done from the beginning. Maybe next time, instead of listening to ignorant citizens whose only goal is to advance Christianity, they’ll listen to groups like the ACLU that actually understand the issue thoroughly and are fighting for religious equality. 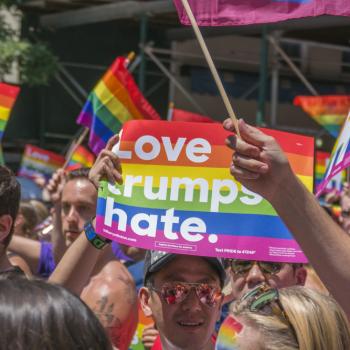