Just as the leader of one Christian organization said it was a problem that two Muslim women just got elected to Congress, another one is echoing that bigotry while going even further.

John Guandolo, a disgraced former FBI agent who appears to treat all brown people with beards as a threat to national security, also lamented the election of Ilhan Omar and Rashida Tlaib. During a recent appearance on “The Glazov Gang” program, he said the two women should be banned from serving in office because only Christians were allowed to run the government.

… Guandolo is declaring that as “sharia-adherent women,” they are unable to uphold the U.S. Constitution and therefore must not be allowed to take office.

“These are people who are now, I would argue, legally they cannot serve in these positions,” Guandolo said. “You cannot have somebody who is adherent to sharia serving in public office. The founders, by the way, were very clear that only Christians should hold public office, so let’s just put that out there.”

The Founders never said that because many of Founders were themselves non-Christian. Guandolo’s knowledge of American history is as warped as Christian pseudo-historian David Barton. For someone who claims to be a true patriot, he has no awareness of the Constitution either. It’s very clear about how there can be no religious test for public office.

It’s interesting that he makes this argument now, when two Muslim women got elected, even though we’ve long had Mormons, Jews, progressive Christians, and non-religious members of Congress. Some of them are even Republican. Are they allowed to serve, or does Guandolo only pipe up when Muslim women appear in the spotlight? 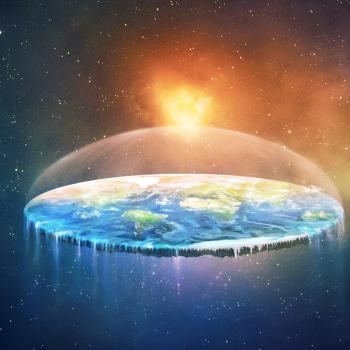 November 20, 2018 Biblical Literalists Are Among the Most Vocal "Flat Earthers"
Browse Our Archives
What Are Your Thoughts?leave a comment