Right-Wing Commentator: If House Democrats Go After Trump, God Will Destroy Them

Right-wing host of The McFiles, Chris McDonald, said on his show Wednesday night that God would punish Democrats if they used their majority power in the House to go after Donald Trump.

Because God hates nothing more than checks and balances.

“These Democrats think they’ve won some kind of pseudo-victory and get all the control of these committees and they’re going to go after Trump,” McDonald said. “I would submit to you, my friend — and I’m saying this from a strictly spiritual standpoint — I’ve never seen a president that has God working through him more, has worked through him more, than this one.”

“I do believe President Trump has God’s hand upon him,” he continued. “I would warn the Democrats tonight — and I’m not saying this flippantly, I’m not saying this to be funny — I’m warning them very seriously, they had better be careful how they touch this president and they better be careful what they do. It will be to their destruction personally, it will be to their destruction as a party.”

If Democrats don’t go after Trump, then the whole party ought to be destroyed. They shouldn’t worry about existential consequences for being lazy and complicit — in other words, acting like Republicans have for the past two years.

It goes without saying that Christians like McDonald never told Republicans to hold back against President Obama when he was in office.

The other guy on that split screen, by the way, is preacher Mark Burns, best known for lying about his credentials, then walking out of an interview with CNN after he was exposed.

Not exactly the best character witness for how to stand up for God and decency. 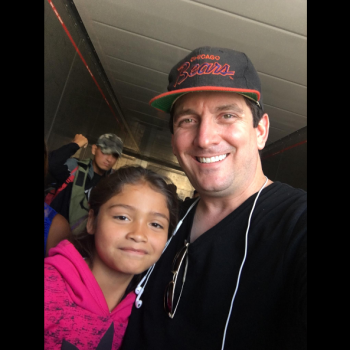