A Massachusetts pastor has been charged with assault after being accused of slapping a five-year-old boy during Bible study.

Onyedikachi Enebechi, a pastor at Winner’s City Church in Brockton, Massachusetts, was charged with simple assault and battery after the parents took photos of the young boy’s red face and contacted police. Enebechi claims he only “nudged” the child with two fingers, but it’s hard to imagine a touch like that would leave the mark in the image.

Enebechi says he was just trying to get the boy’s attention.

Police say the pastor told officers he nudged the child with two fingers out of frustration in order to get his attention.

However, the boy’s father believes far worse happened, with a picture of his child’s red face as his proof.

“From a little nudge to the face to that, doesn’t add up,” Vernon Ford, Jr. said. “One plus one is not three.”

In the three years the father attended Winner’s City Church in Brockton, he says he never had a reason to question his trust in pastor Onyedikachi Enebechi.

However, that changed when he said his 5-year-old son told him he was slapped by the pastor during bible study last Sunday for talking to his cousin when he was supposed to be quiet.

Ford said he cussed out the pastor (which seems completely reasonable to me given the circumstances) and that the picture was taken almost immediately after the alleged incident.

Ford, Jr. said the child’s mother, who was in a different room at the church at the time, took a photo shortly thereafter to document the redness on their son’s cheek before calling police to press charges.

“Me, his mom, his uncles don’t do that to him,” the father said. “So, no one outside of that barrier is going to do that to him neither.”

If you believe spanking is bad, as Ford says, then the idea of anyone else laying a hand on your child without your approval seems even more egregious. Hitting a child is no way to be a moral authority. Hitting a child when you’re a pastor shatters any sort of trust that he may have wanted to build.

Ford made it clear that his son will no longer attend the church. Good move. Why bother? If slapping a kid is how Enebechi supposedly gets kids’ attention, then there’s no need to go to him for moral instruction. It remains to be seen if other families will follow them out the door.

A court date for Enebechi will be announced soon. 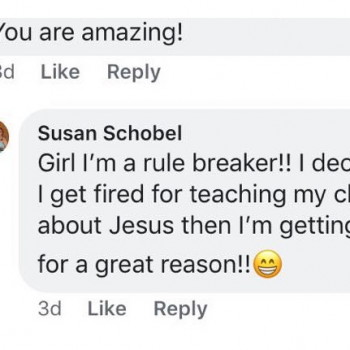