The pastor of an Assemblies of God church has a warning for Christians: Don’t practice yoga, because you’ll end up demon-possessed.

While surely not intentional, it comes a week after a gunman shot and killed two people who were taking a yoga class.

You can hear Pastor John Lindell‘s baseless rant around the 39:39 mark of the video below:

… Lindell told the attendees of James River Church in Ozark, Missouri — which has a congregation of about 10,500 — that the positions in yoga were “created with demonic intent to open you up to demonic power because Hinduism is demonic.”

Lindell said the sun salutation, a common sequence of positions in yoga, is meant to worship Surya, the Hindu sun god. “To say the positions of yoga are no more than exercise are tantamount to saying water baptism is just aqua aerobics,” Lindell said.

Well, water baptisms are aqua aerobics… if you don’t believe in baptisms. And if you aren’t Hindu, then whatever religious connotations may exist in yoga are meaningless, too. It’s exercise. It’s stretching. At worst, it’s cultural appropriation. But for the vast majority of yoga practitioners (at least of the basic white girl variety), it’s about the health benefits rather than anything spiritual.

In his notes from the sermon, Lindell includes several Bible verses pertaining to the evils of witchcraft, which is flat-out ridiculous, considering yoga’s origins. Lindell said himself that yoga is a Hindu practice. Hinduism isn’t witchcraft. (Maybe he should, you know, talk to some Hindus before going on a misinformed rant about it.)

By the way, if he really has a problem with anything that has Pagan origins, he’s going to be shocked to learned about Christmas and Easter…

(Thanks to Leon for the link) 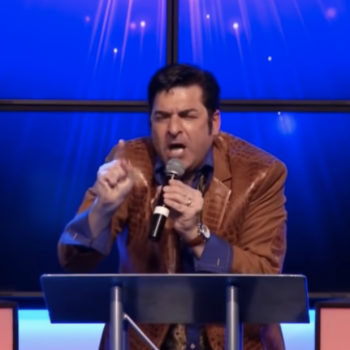