A Texas man completely lost it in front of protesters outside a Confederate monument in the city of Orange. Their argument eventually led him to scream about how Jesus hated them.

I repeat: He said Jesus hates the people protesting monuments to slavery and systemic racism.

The unnamed man was directing his rage at Jeremy and Tracey Parzen, who took out a billboard urging the removal of the Confederate memorial and were protesting outside of it.

“Why don’t y’all get out of here?” he shouted, in footage captured by the Parzens and uploaded to YouTube in a now-viral video on Sunday morning. “What gives y’all the right to be fucking protesting America?”

I suppose you can’t blame the man for confusing racism with America itself; the two have been in a tight-knit relationship throughout our history.

“Because it’s dumbass Democrats,” he said, raising his voice. “Look what y’all are doing to our country. Y’all are a bunch of damn idiots. You try and destroy our heritage, you’re tearing down monuments because of y’all’s beliefs. Y’all don’t give a damn about nobody’s beliefs but you damn own dumb asses. Y’all are fucking idiots, and you don’t deserve to be in this God damn country. You don’t like it? Take your ass on.”

At one point, one of the protestors told him “Jesus loves you,” to which the man viciously retorted,

“Yeah, you’re damn right he does,” the man shouted back. “But he fucking hates you!”

Quick: Someone get this man a history book and show him what men in Jesus’ time period and location actually looked like. (Spoiler: They were browner.) Not that it would make a difference; he’d likely call it “fake news.” Never mind that the Bible says, “For God so loved the world,” not “For God so loves white Christian men while hating everybody else.” 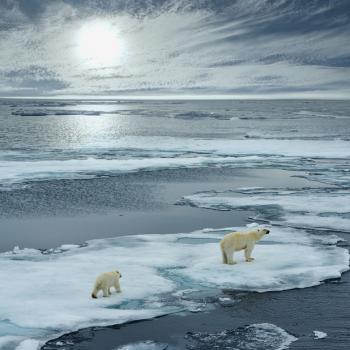 November 14, 2018
Accepting the Truth About Climate Change is a Matter of State/Church Separation
Next Post