Dr. Shahid Shafi is the vice chairman of the Tarrant County (Texas) Republican Party. And that’s unusual because… his name is Dr. Shahid Shafi. He’s an educated brown immigrant who became a U.S. citizen in 2009. The practicing Muslim now says he’s “proud to be a Republican.” Earlier this year, he became one of the local GOP leaders.

But this past September, there was an internal push for the Party to remove him from that post. Why? You know exactly why. Some Republicans accused Shafi of being an extremist — a member of the Muslim Brotherhood — who wants to implement Sharia Law.

None of that was accurate… but since when do Republicans let facts get in the way of their bigotry?

Shafi wasn’t removed from his position at that time. The reason, though, was attributed more to optics than desire. The Party leaders didn’t want headlines appearing just before the midterm elections all about how the GOP ousted a Muslim leader just for being Muslim. They decided to shelve further discussion of his position until after the election.

Well, here we are. It’s after the election. How long will Shafi have his title?

As recently as this weekend, they’re still debating it.

Tarrant Republican precinct chairs met for nearly four hours Saturday — and considered the issue behind closed doors for more than an hour — before adjourning without voting on the proposal.

“There was no vote on this today,” Tarrant Republican Chair Darl Easton said after the group adjourned, noting that the issue will come up again at a January meeting. “The for and against speakers (never) got exhausted.”

So they’re postponing it again. And outside the room where that happens, other Tarrant Republicans are trying to strategize about how to kick Shafi out, including an alleged plea from Republican Dorrie O’Brien, who initially made the proposal to kick out the Muslim.

“Hey, Dorrie here,” the message stated. “If you do ask shafi to not accept the position, please please please do not mention anything about the MB [Muslim Brotherhood] as part of your reason. He will deny it, and mess with your head.

“If he said yes, he’s still mess with your head. These dawah guys are very good. As to the S-T branding the TCGOP as a bunch of bigots or racists, they don’t need an excuse, they do it already. We’re patriots who don’t allow jihadists to play in the fields of the lord.”

The fact that the Party hasn’t denounced these remarks and shuttered the discussions altogether tells you everything what you need to know about the GOP. Bigotry has to be debated and discussed rather than shut down immediately. They’re a national embarrassment for even wasting their time on this issue. 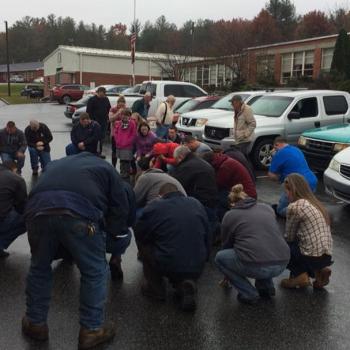