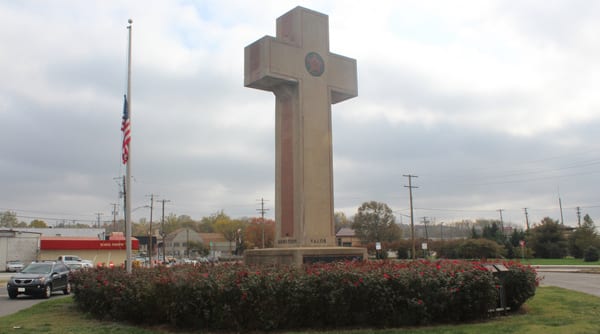 We’ll talk about reactions and what this could mean in a moment, but first it’s important to understand what this case is about. Both lawsuits involve the “Peace Cross” (a.k.a. the Bladensburg Cross), a World War I memorial in Prince George’s County, MD.

The cross went up in 1925 under private ownership. All donors had to sign paperwork referencing “the Supreme Ruler” of the universe and the group’s motto, “One God, One Country, and One Flag.” There were only Christian prayers at the dedication ceremony. There have been worship services held at the base in the years since. Even after the cross was taken over by the local government, the promotion of religion continued. The government has spent $117,000 on maintenance of the cross, with another $100,000 earmarked for future repairs. That’s taxpayer money essentially promoting religion.

While there’s a plaque acknowledging the World War I heroes, most people would never know it’s there because it’s obscured. This is and always has been a Christian cross. Everyone knows that. They can call it a war memorial, but it’s still a giant taxpayer-funded ad for Christianity.

That’s illegal, and that’s why the American Humanist Association filed a complaint about it in 2014.

While the AHA lost the original challenge, the 4th Circuit Court of Appeals ruled 2-1 this past July that the memorial was unconstitutional. After all, they said, any reasonable person would see it as an establishment of Christianity. The full 4th Circuit voted 8-6 against rehearing the case. But there was pressure from conservatives and 109 members of Congress, including Democrat Sen. Joe Manchin (who voted for Kavanaugh), for the Supreme Court to overturn the decision.

The AHA says it looks forward to oral arguments — this will be the Appignani Humanist Legal Center’s first case in front of the Court.

“We remain confident in our legal position and look forward to presenting arguments to the Supreme Court,” said Monica Miller, senior counsel for the American Humanist Association and lead counsel on this case. “The Fourth Circuit’s decision correctly recognized that the government’s prominent Christian cross memorial unconstitutionally favors Christian veterans to the exclusion of all others,” Miller added.

“Rather than continue to waste taxpayer dollars repairing an exclusively Christian symbol, the government should use that money to construct a new memorial atop the historic platform that will honor all war veterans,” says Roy Speckhardt, executive director of the American Humanist Association. “The current Christian monolith fails to represent the pluralistic nature of religion among veterans, and among Americans.”

Americans United for Separation of Church and State’s president and CEO Rachel Laser urged the Supreme Court to reaffirm this monument’s unconstitutionality.

“We respect the state’s wish to honor veterans and agree with the appeals court that this worthy goal can be accomplished in ways that don’t promote a particular religion and that respect the religious diversity of Maryland’s citizens, including veterans. We urge the Supreme Court to affirm that this cross is unconstitutional.”

The conservative Alliance Defending Freedom, which filed a brief in support of the cross, is asking the Court to ignore everything the church/state separation crowd says because their feelings don’t matter.

“One group’s agenda shouldn’t diminish the sacrifice made by America’s veterans and their families. The Supreme Court was right to take up this case so that it has the opportunity to affirm that the offended feelings of a passer-by does not amount to a constitutional crisis. A passive monument like the Bladensburg Cross, which acknowledges our veterans and our nation’s religious heritage, is not an establishment of religion.”

There’s obviously cause for concern here. The Court has five fairly solid conservatives who could very well say this memorial — and all others like it — are legal, paving the way for even more to be erected at taxpayer expense. But doing so would require an incredible breach of precedent. There’s no ambiguity about the Christian nature of this monument. No one would ever consider this a war memorial unless they were told that in advance. For the justices to say this is somehow secular — and merely in the shape of a cross — requires the sort of suspension of disbelief that Brett Kavanaugh only achieves after one too many beers.

At the same time, this shouldn’t be controversial. As attorney Monica Miller noted in her brief to the Supreme Court for this case, every Circuit Court that’s addressed cross memorials — including the 4th, 7th, 9th, and 10th — has said they’re unconstitutional.

As far as cross-on-government-property cases go, if you’re a conservative Christian, this is hardly the best case to bring forward because the religious nature of it is so obvious.

It’s not like there’s a compromise either. (One judge proposed the “arms” of the cross be cut off so this becomes a secular “obelisk,” but Christians aren’t about to desecrate the cross… because they know it’s a cross.) This is either legal or it’s not. The question is how far-reaching a decision would be. Will it apply only to this case or everywhere?

Keep in mind there’s another cross case still pending before the Court. The Bayview Park cross (in Pensacola, Florida) has been ruled unconstitutional, but the judges in that ruling practically begged the Supreme Court to take it up. We’re still waiting to hear if they do that.

Ultimately, the Supreme Court will have to decide a couple of things:

Is the Peace Cross inherently unconstitutional because it’s a cross-shaped memorial on government property?

And by what standards do we make that call? Do we use the Lemon Test? The Ten Commandments monument rule that it’s only illegal if it’s a stand-alone Christian monument that’s not part of a larger display? Does taxpayer funding for maintenance for a Christian cross amount to a violation of the Establishment Clause because it’s excessive entanglement with religion?

It’s possible — worst-case scenario — that the Court could overturn those principles, creating their own rules for when something violates the Establishment Clause instead of using the rules we’ve all lived by for decades.

Will the Court rule narrowly, so that any decision they make applies only to this cross and doesn’t become the basis for other ones?

These are questions that get to the heart of the principles underlying church/state separation. With Kavanaugh now on the bench, the Court could create a gigantic hole in the wall of separation.

By the way, if you’re not already an AHA member, you should become one and support their efforts to defend church/state separation and promote Humanism.

November 2, 2018
Please Support the Work I Do Through This Site
Next Post