As we learned a week ago, Ark Encounter is not doing as well as it was a year ago. Not only is attendance declining each month compared to the same time last year, it’s declining at a greater rate each month.

Ken Ham never wants to admit this. So like Donald Trump, whenever the media reports the facts, he responds by calling them “fake”… as if they made up the numbers Ark Encounter literally submitted to the city. Ham’s argument is that attendance is up… but the media only covers paid tickets, not the people who walk through the doors, many of whom get in for free because they’re kids or people with lifetime passes.

The Lexington Herald-Leader recently reported on all of this — backing up its claims with numbers — but Ham isn’t having any of it. He cares about math as much as he cares about science. So he’s lashing out with an article all about “media bias.”

My favorite response may be this one where he just tries proving his point by breaking out the A-word:

The ultimate source for this article is not AiG but local atheists who have continued to voice their disdain/hatred against the Ark (and Creation Museum) and do all they can to spread misinformation in their failed attempts to undermine the phenomenal success of the Ark and Museum attractions.

He says that like atheists are making things up just to suit our needs. That may be how Creationists operate, but not the people who care about reason and logic. We quote the numbers because that’s all we have. And the numbers are going down. Even if overall attendance is up, a baby who gets in for free isn’t contributing to the local economy, so who cares?

If Ham wants to stop the negative press, he should get more people to pay to visit his homage to Christian mythology. When that happens, we’ll report it. 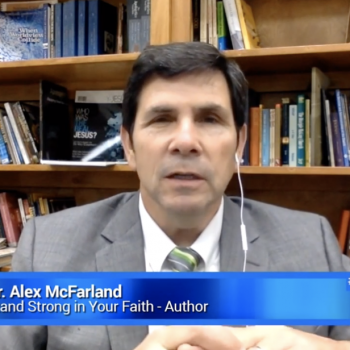 November 3, 2018 Christian Apologist: Democrats' "Ungodly" Platforms Amount to "Treason"
Browse Our Archives
What Are Your Thoughts?leave a comment