Christian apologist Alex McFarland, who has no idea why Millennials are abandoning faith, said on TheDove TV’s Focus Today program the other day that Democrats were inherently treasonous.

… McFarland said that it is now the entire Democratic Party that is committing treason.

“As everybody gets ready for this election,” McFarland said, “if you love America and if you love our liberties and if you recognize that for over 240 years plus, we’ve been under one Constitution and the greatest, most prosperous nation in history, then I would urge people to vote and to vote Republican.”

McFarland said that “people ought to vote Republican” because the Democrats have “aligned themselves with things that have brought them so far down the road of progressivism, socialism, pluralism, relativism … The platforms of Democrats, at this juncture, besides being ungodly, the platform of Democrat candidates at this point amounts to treason against the U.S. Constitution.”

Huh. Helping poor people, not wanting to rip kids away from their parents, taking a reason-based rather than reactionary approach to immigration… you would think those beliefs make our nation stronger. Yet McFarland thinks the vitriol and divisiveness and cruelty and know-nothing policy-making exhibited by Republicans — and the way Donald Trump is practically selling this country to the highest bidders and most loyal devotees — is downright patriotic. (It’s not the first time McFarland has made this sort of claim. He said the same thing last month about former NFL quarterback Colin Kaepernick.)

As much as I wish Democrats were more “ungodly,” they’re not. Many of the items on the Democratic platform are promoted by the Religious Left, and the officials themselves are virtually all religious. McFarland can use atheists as a slur all he wants, but if this administration represents his brand of Christianity, leaders of predominantly white evangelical churches should be ashamed of themselves. 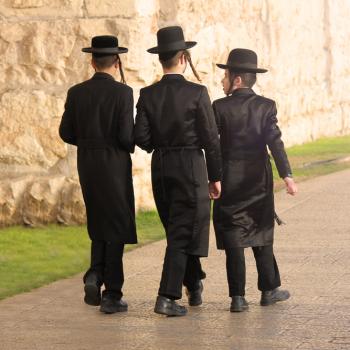 November 3, 2018 Orthodox Jewish Parents Sue School to Force Admission of Unvaccinated Child
Browse Our Archives
What Are Your Thoughts?leave a comment