O’Connor, who will now go by the Islamic name Shuhada’ Davitt, made the announcement on Twitter. She said she was “proud” to become a Muslim and that any “intelligent theologian” would end up there, too.

This is to announce that I am proud to have become a Muslim. This is the natural conclusion of any intelligent theologian’s journey. All scripture study leads to Islam. Which makes all other scriptures redundant. I will be given (another) new name. It will be Shuhada’

An Irish Imam even posted a video of Shuhada’ saying the Islamic declaration of faith.

World renowned singer Shuhada Davitt @MagdaDavitt77 (#SineadOConnor) has proclaimed the #Shahadah with me in #Ireland. She is so happy ! Masha Allah !#Ireland #Islam #SineadOConnorEmbracesIslam @SineadOconnorHQ pic.twitter.com/mBeHlcrgqW

This may strike many as a strange development. I was certainly confused when I first heard the news. I still have a lot of questions. But there’s some logic in the move, too. O’Connor was raised as a Catholic and later grew disillusioned by the problems within the Church. After the 1992 backlash, she was also rejected by Catholics after getting ordained by a “breakaway church” in Lourdes despite being a woman.

Why not turn to atheism or some sort of nebulous spirituality? Remember that O’Connor said the biggest regret she had after tearing up a picture of the pope on SNL was that people wrongly assumed she was an atheist. It’s clear “no religion” was never an option for her.

And if you don’t want to be part of the largest religion in the world, but you still desire a faith-based life, might as well go with the second largest religion. That’s not to say her theological beliefs make any more sense, but there’s some logic in her actions.

That said, I hope she applies the same strict scrutiny to Islam as she did to Catholicism. It’s not like Islam is immune to abuse scandals and cover-ups. Even looking outside the extremists, there’s plenty of good reason to criticize the faith. If she ever does come to that sort of conclusion, though, she may want to think twice before publicly tearing up a picture of a Muslim leader…

October 26, 2018
Don’t Forgive Caitlyn Jenner for Selling Out the Trans Community to Trump
Next Post 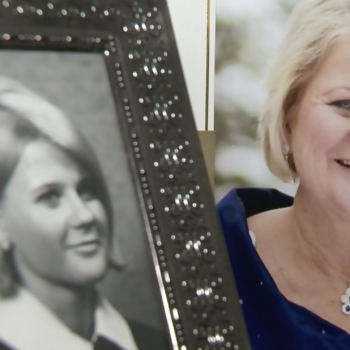