The American Association of Evangelicals (AAE) wants to warn you about the biggest threat to America.

Not that one either.

Definitely not that one.

Their answer? Progressive Christians funded by George Soros. (And with that, someone in the AAE just won Christian Bingo.) 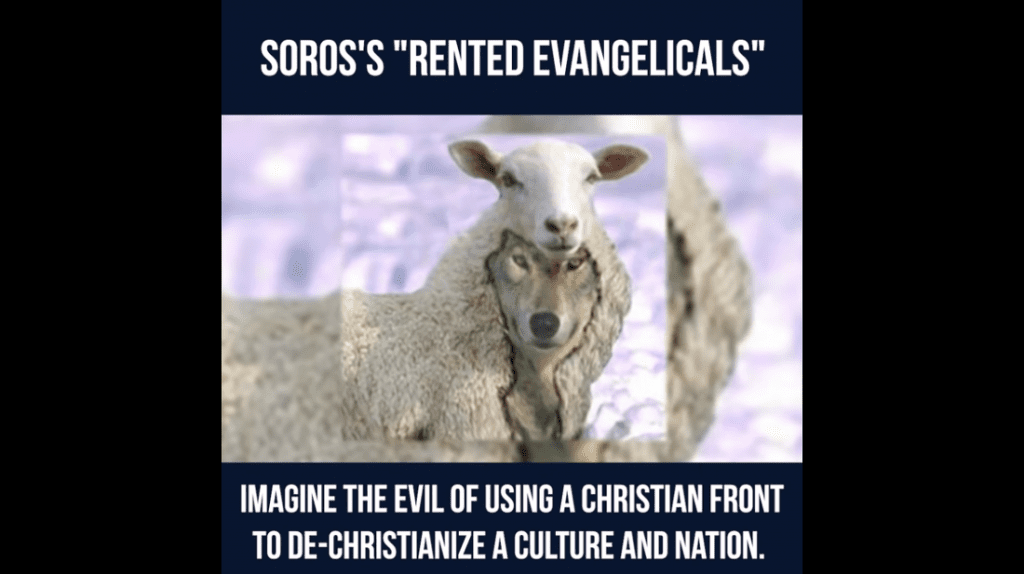 Here’s how a right-wing publication described it:

The AAE on Monday released an explosive three-minute video, “Soros’s Rented Evangelicals” exploring the George Soros network’s funding of “evangelical mascots” and a “Rent-an-Evangelical” tactic to confuse and divide the Christian vote for the pro-faith, pro-life Republican party.

Democrat ministers the Rev. Jim Wallis and allies are touring many states on “Vote Common Good” buses to “flip Congress” and “reclaiming Jesus” to split the evangelical vote before the mid-term elections.

The AAE video features the newly released voice recording of Wallis of Sojourners as he publicly denied that he was a recipient of Soros funding. Soon after, grants disappeared, but journalists found hundreds of thousands of dollars in grants from Soros’s Open Society Foundation to Sojourners. Wallis later replied, “I didn’t recall,” as he finally admitted the Soros connection.

Spoiler: Sojourners would be doing the same work with or without money from Soros’ group. Also, Christianity is already divided even if white evangelicals get an outsized amount of attention.

It’s one thing to disagree on matters of theology. But it’s really pathetic when a group of Christians is condemning fellow believers who support LGBTQ equality, affordable healthcare, and other policies that improve the lives of poor people and minorities. While we’re at it, misrepresenting your opponents — a.k.a. lying — is also something the Bible condemns.

Groups like AAE may claim to have the nation’s best interests at heart, but it’s hard to put that into practice when you’re busy supporting Donald Trump and his agenda. More power to the Religious Left.

October 25, 2018
Pastor Says on InfoWars That Ruth Bader Ginsburg Should Be Executed for Treason
Next Post